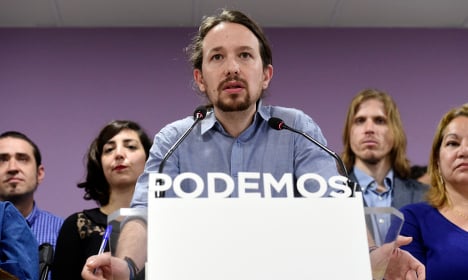 Iglesias maintained that there was unity in the party with regards to ongoing negotiations to form a government. Photo: Javier Soriano/AFP

Podemos had already been shaken by a series of resignations, and the crisis came to a head this week when Iglesias fired the party's number three Sergio Pascual due to “poor management,” prompting fears of a rift at the top of the grouping.

Pascual is close to Inigo Errejon, the party number two who has been Iglesias' right-hand man since Podemos was founded in January 2014.

Spain has been locked in political paralysis since December's elections put an end to the traditional two-party system, leaving a hung parliament divided among four main parties, none of them with enough seats to govern alone.

Podemos came third with 65 seats out of 350, giving it considerable clout in subsequent coalition talks — so much so that it blocked recent attempts by the Socialists to form a government in a parliamentary vote of confidence.

The gridlock is such that new elections could be held in June if no power-sharing agreement is found.

Speculation is rife that Podemos is divided over what to do now, and militants fear that a rift between Errejon and Iglesias would be damaging for the party at this sensitive time.

On Friday Iglesias told reporters he had nominated Pablo Echenique, a 37-year-old physicist who heads up Podemos in the northeastern region of Aragon and enjoys widespread popularity in the party, to replace Pascual — a decision that still needs to be approved by the top executive organ.

“He enjoys huge prestige in our organisation,” Iglesias said.

He maintained that there was unity in the party with regards to ongoing negotiations to form a government, in a bid to cut short speculation that Podemos is divided over what strategy to take.

Errejon has so far made no comment on the new nomination.

Carolina Bescansa, another high-profile Podemos lawmaker who is close to both, acknowledged earlier that the party was going through “growing pains” but insisted divisions were structural and not strategic.

“It's hard to evolve from a group of 40 people (who would gather) in a Madrid theatre to the fourth floor” of the parliament, she told AFP.