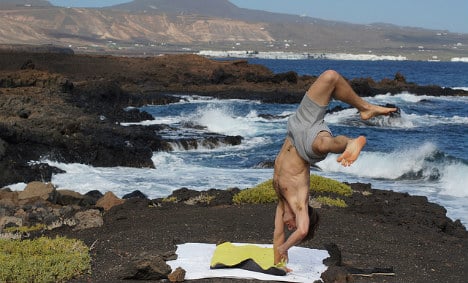 Chillax with a spot of yoga on Lanzarote. Photo: Michał Stefanów / Flickr

Like tens of thousands of British holidaymakers each year, the Prime Minister and his family will be flying out with budget airline Ryanair for an Easter holiday this year, but the Cameron visit won’t be of the cheap package variety that led to the island being dubbed “Lanzagrotty”.

Here are ten of the best things to do in Lanzarote to ensure a totally “chillaxing” (as the Tory leader likes to call it) holiday.

On their last visit to the island in 2014, the Camerons chose to stay at the boho retreat of Casa Tomarén, a rural complex inland near the pretty little town of Teguise.

The restored 18th century farmhouse with private villas is set around a “yoga hall” and boasts a swimming pool within a natural volcanic crater as well as hippy chic interiors inspired by Indonesia.

There are lots of eco retreats dotted around the island, from complexes offering accommodation in Mongolian yurts or ancient lava chambers known as Jameos.

Head to the beach


Lanzarote's Playa Papaguayo is one of the best beaches in Spain. Photo: IDJM / Flickr

With curving playas of fine white sand as well as black volcanic sandy stretches, Lanzarote boasts some of the best beaches in the Canary Islands and indeed all of Spain. But be warned: jellyfish can be found in these waters, as Cameron found out back in 2014 when he received a nasty sting and went running from the waves screeching “ouch!”.

Take to the waves

The British Prime Minister likes nothing better on holiday than to grab a board and head into the surf, which is just one of the reasons why Lanzarote – dubbed the Hawaii of Europe – is one of his favourite destinations (that and his in-laws have a house there).

Good waves can be found throughout the year and for those who haven’t yet honed their skills, there are several surf schools to choose from in Caleta Famara and Playa Blanca

Swim into the deep

If the tranquillity below the waves is what floats your boat then pull on a wetsuit and take to the deep. Whether a beginner or an experienced diver, the Atlantic waters around Lanzarote are teeming with marine life from manta rays to seahorses, and wreck, reef and night diving are all on offer. For those seeking out a bit of watery culture, head to the first undersea sculpture museum in the EU. Opened earlier this year, the Museo Atlantico is currently exhibiting the haunting sculptural works of British artist Jason deCaires Taylor.

For the more active types or when you just can’t chillax by the pool anymore, head inland to Timanfaya National Park, a series of volcanoes and massive lava fields where you can hike through the martian-like landscape.

Get on your bike

The climate and landscape with its varied terrain and dramatic views make Lanzarote a dream come true for mountain bikers and there are several cycling events that bring in cyclists from around the world. Feast on Canarian lobster, fish caught that morning, or meat barbecued over the ferocious heat rising up from deep inside volcanoes.

Local specialities include goat cheese  and of course papas arrugadas, the wrinkly potatoes baked with sea salt and served with a spicy sauce.

Even in this bleak volcanic landscape with very little annual rainfall, vine cultivation has flourished and the island produces some excellent wines. Do a wine tour at La Geria and make sure to sample the local favourite, Malvasia. If you haven’t heard of this Lanzarote native, then you will have by the time you leave. The island’s most famous resident left his stamp across the island, blending his unique architectural style and artistic flair with the natural environment. Visit the César Manrique Foundation where the architect/artist lived and work.

One thing Lanzarote has plenty of is beautiful views. So whether it is from a terrace overlooking the sea with a glass of the local white wine in your hand, or while strolling along from a palm-tree-lined boulevard in the fishing village resort of Playa Blanca, there is no better way to end a day of chillaxing than a view like this: 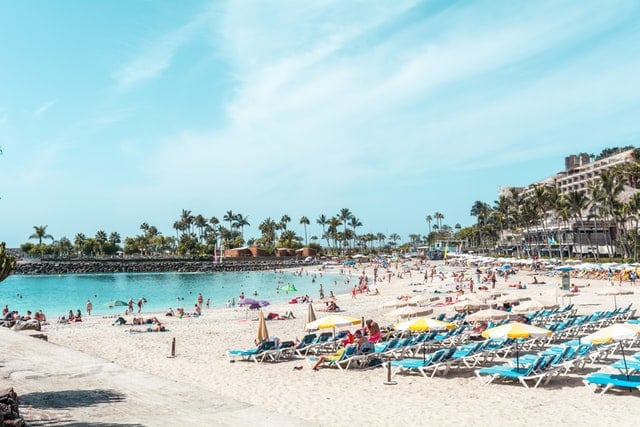 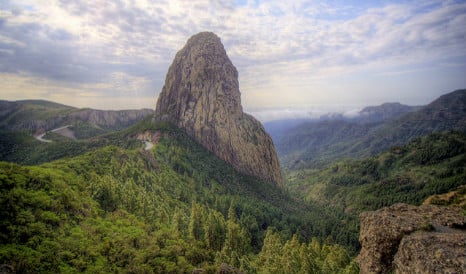