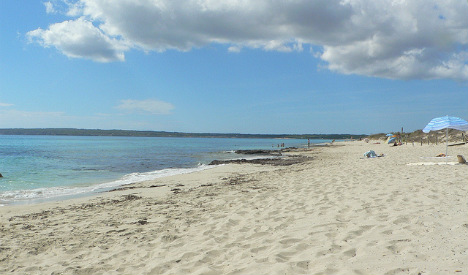 The drugs washed up on Formentera's Migjorn beach. Photo: Xaviaranda/Flickr

The 83kg of the Class A drug were contained within three punchbags which were tied together and had a waterproof GPS system attached. The bags washed up on Playa Migjorn, a 5km stretch of sandy beach on the south of the island.

The unnamed woman made the discovery on Tuesday afternoon and immediately alerted the Civil Guard on the Balearic Island.

Investigators believe the drugs were most likely dumped from a boat just off shore to avoid detection on arrival in port with the intention that the smugglers would use the GPS to locate the offloaded stash to retrieve later.

The Civil Guard said the drug had a street value of at least €4 million ($4.5 million).

Formentera is the smallest of Spain’s Balearic Islands, located to the south of Ibiza, and was recently recognised for having the best beach in Europe.