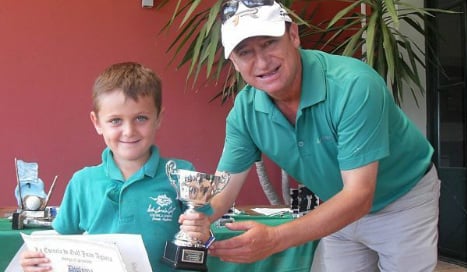 Last Saturday, Yago won the competition with a score of 50 strokes but on returning home realized he had actually got 51.

Rather than shrug off the error, the boy wrote a letter to the Royal Andalusia Golf Federation (RFGA) explaining the mix up so that the trophy “could be given to the player who deserves it”.

“My dad told me that to accidentally sign a card with fewer strokes is grounds for disqualification,” the seven-year-old wrote in the letter. The letter Yago wrote to the golfing federation.

Mateo’s father, Kostka Horno, told Spanish daily El Mundo that he had received lots of messages from fellow parents praising his son’s sporting gesture, which had “made them reflect on what it is to be a good sport”.

“After every tournament, I have a routine of transferring the results onto a clean sheet of paper. When I added up Yago’s strokes I saw that the numbers didn’t add up, I got 51 and not 50 – the score written on the card,” Yago's father explained.

Horno said his son was “in shock” when he realized the error.

“He was very worried about the reaction of others. It was a genuine mistake but he didn’t want anyone to think that he was a cheat, and he really didn’t want his mum to know,” his father said.

Horno said his son made the decision to return the trophy himself.

The gesture was received warmly by the Royal Andalusia Golfing Federation.

“We want to recognize this wonderful gesture of a player who, at a mere seven years of age, has proven to be a true gentleman,” the federation said in a statement.

“He has already learnt that the most important thing golf can teach us: honesty and a respect of the rules and of your peers.”