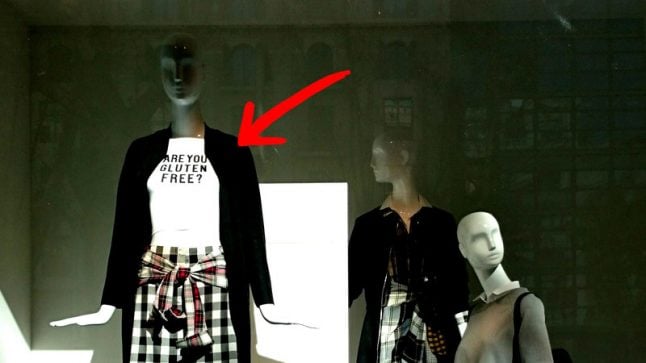 The T-shirt with the slogan 'Are you gluten free?' Photo: change.org

Spanish fashion brand Zara has pulled a T-shirt with the slogan “Are you gluten free?” after offending people with coeliac disease; a condition in which the small intestine is hypersensitive to gluten making it hard to digest food properly.

The simple white T-shirt is emblazoned with the slogan “Are you gluten free?” in bold black writing may be designed as comment on the latest fad diet but has offended those who can't digest gluten products because of a medical condition.

A petition on the website change.org calling for Zara to pull the controversial T-shirt collected over 50,000 signatures in just under a week . and now Zara has pulled the T-shirt, even to the surpise of the petition's author.

“The truth is that I just wanted Zara to reflect on the message, I was trying to explain that perhaps it wasn’t the best way to make people aware of the illness,” she said.

“I was really surprised by Zara’s quick response, both on change.org and in its actions, pulling the T-shirts from sale in its stores and online,” Casadesús added.

The petition, started a week ago, makes it clear that the disease should not be used for fashion purposes.

“Coeliac disease is not a fashion statement, nor should you make fun of the disease because of the strictness of the gluten-free diet and the problems that can arise if you do not follow it correctly,” the petition read.

In a statement released on March 14th, Inditex, the biggest fashion company in the world, which owns Zara, announced it was pulling the T-shirt from its stores.

“The T-shirt mentioned in this petition was pulled from our online store a few weeks ago now and we are currently confirming that it is not for sale in our stores either,” said the statement.

“We sincerely regret that this case might be interpreted as a trivialization of coeliac disease, the absolute opposite of our intentions.

“We would like to apologies, in any case, if anyone interpreted the T-shirt in this way,” the statement continued.

“Inditex is especially sensitive to matters relating to health, and particularly those concerned with coeliac disease.”

The support for the petition has surprised none more so than its creator, Marta Casadesús, but, she told The Local, there is increasing awareness of the illness these days.

“There are a lot of coeliacs and I think that these days everyone knows someone who is, so it's easier for people to put themselves in the shoes of the people who have to follow such a strict diet.”

It is not the first controversy to befall the fashion behemoth; in 2014 it was it hot water for selling a striped children’s T-shirt that resembled the uniforms worn by prisoners in Nazi concentration camps.

The navy-and-white striped “sheriff shirt” behind the clothing controversy featured horizontal stripes and a six-pointed gold star, and was also eventually pulled by the store.