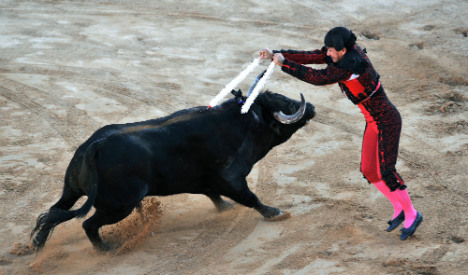 The protesters marched through the streets of the eastern town of Valencia to protest at local authority bans applied in some parts of the country.

Famous names from the ritualistic 'sport' famously portrayed by Ernest Hemingway in his “Death in the Afternoon” novel attending the march were Enrique Ponce and Julian Lopez “El Juli” Escobar.

“The bullfighting world is aware of the problem and maltreatment we are suffering at the hands of a part of the political class,” said Morante de la Puebla.

“We are here to say, this is our life, it's a tradition,” he bellowed.

Ponce meanwhile read a tract in defence of bullfighting, insisting the tradition has for centuries been an integral part of Spanish culture even if some refuse to accept it as such.

And he urged that 'toreros' be treated with equal respect as those persuing other 'artistic' activities.

The morning had seen a lower-key protest against bullfighting with some 20 semi-clad activists who had splattered themselves with red ink to symbolise the bulls' suffering demanding the practice be abolished.

Spain is split overall on the issue.

Six years ago the largely autonomous regional Catalan goverment banned 'corridas' or bullfighting in the region.

Some cities run by leftist administrations including Madrid and Valencia also recently cut subsidies for bullfighting.