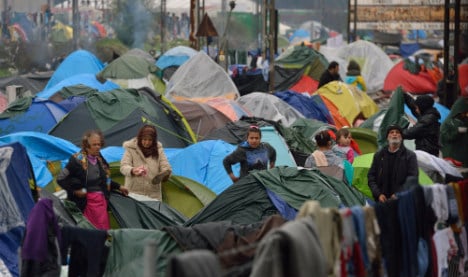 Refugees in the crowded camp at Idomeni, Greece.

“This proposal from the outset seemed to us, from the point of view of the [Spanish] government, unacceptable,” García-Margallo told reporters on arrival at the summit of EU foreign ministers in Brussels.

He insisted that Spain would only support a scheme that would allow individuals the right to claim asylum.

Instead, Spain is calling for a personalized approach that takes into account each refugee’s background.

“Anyone arriving on European territory must have the right to individualized attention, to file an asylum request that will be taken into consideration, and the right to appeal if the request is denied,” García-Margallo explained.

“Throughout this process, any possibility of expulsion is suspended.”

EU nations have outlined a “one in, one out” deal with Turkey that would see one Syrian refugee resettled in Europe for each one returned from Greece to Turkey.

The deal is designed to deter refugees from attempting the perilious sea journey and remove power from the people trafficking mafias.

In exchange for Turkey’s help, the EU will agree to “fast track” its efforts to join the European Union and remove visa restrictions for Turkish citizens.

It is an apparent U-turn for Spain’s acting government as last week, Jorge Fernández Diaz, Spain’s acting Interior Minister indicated that Spain would back the deal.

He warned that the deal could see new routes open up across the western Mediterranean bringing waves of refugees to Spainish shores.