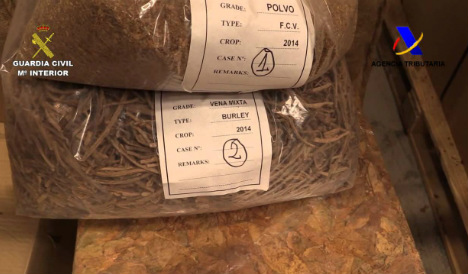 The tobacco was found in several warehouses in the provinces of Jaen and Almeria in the southern region of Andalucia and it had a street value of €14 million  ($15.4 million), the finance ministry said in a statement.

Police detained six people who are suspected of chopping up the tobacco so as to make cigarettes and then selling it over the Internet.

“They even posted several tutorials online where they showed how to roll the cigarettes,” the statement said.

The operation more than doubles the previous record seizure of 41 tonnes of contraband tobacco carried out in November 2015 in Andalucia. Eleven people were detained in Jaen and Madrid as part of that operation.

The authorities suspect the six people who were arrested in the latest sting were trying to “substitute” the contraband tobacco operation that was dismantled last year.

Both contraband operations came to light when legal tobacco sellers in Andalucia complained that their sales had dropped sharply.