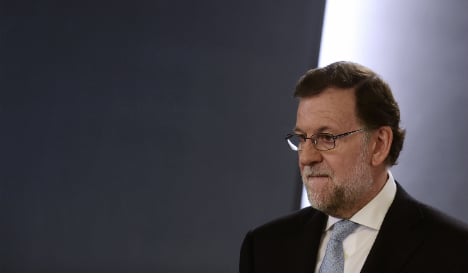 Are his days numbered? Photo: AFP

Alberto Garre, former president of Spain's Murcia region, said he was part of a “silent majority” within the PP wanting Rajoy to stand down over his failure to garner support for a coalition government following inconclusive December elections.

“I honestly think that everything centres on Mariano Rajoy stepping aside, for Spain and for the Popular Party,” he said in a radio interview.

Garre is the first from within the party to come out publicly against Rajoy, although calls for him to step aside have grown outside the PP.

The party has been hit by a string of corruption scandals – an issue that critics say the prime minister has failed to address.

Spain has been governed by a caretaker government led by Rajoy since December 20th polls left a hung parliament divided among four main parties – none of which won enough seats to govern alone.

Rajoy's PP won the legislative polls but far from the absolute majority it needed.

The Spanish leader then failed to get support for a so-called “grand coalition” composed of his party, the Socialists and upstart centrist grouping Ciudadanos.

Sanchez struck a deal with Ciudadanos, and while lawmakers rejected this proposal last week, the two parties now form a considerable bloc within Spain's fragmented parliament, albeit with no absolute majority.

As such Rajoy's plan for a “grand coalition,” which he continues to push for, appears increasingly unlikely to succeed.

The Socialists categorically refuse to get into bed with the PP.

And their new allies Ciudadanos – one of the only groupings willing to talk with the PP – have publicly come out against Rajoy, saying he must step down from the leadership of a corruption-tainted party for any talks to go forward.

Rajoy loyalists quickly lept to his defence on Wednesday, though, with Interior Minister Jorge Fernandez Diaz saying the embattled premier enjoyed a “fundamental consensus” of opinion within the party.