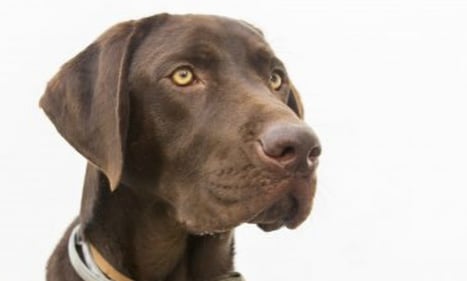 The dog, owned by Malaga couple José Ignacio (Nacho) and Abla was being taken for his morning constitutional along the southern city's seafront when the usually placid animal began to bark.

Nacho attempted to calm his pet and pull him towards home but the dog’s barks became more frantic and he pulled and pulled his owner in the direction of the sea wall.

“On his morning walk  started barking and pulling my partner Nacho in the opposite direction until Nacho discovered a man had fallen in the water was drowning,” Nanook's owner Abla Kadiri told The Local. A portrait of Nanook by his owner Abla Kadiri

He ran for help and the man in his sixties was pulled out by team from the Port Police and Civil Guard.

“He was freezing and close to drowning,” explained Nacho. “He was hauled into a boat and wrapped in a blanket. He was saved thanks to Nanook”.

The couple, who describe their chocolate lab as “very noble, affectionate, obedient for his age and placid” can now add “heroic” to the list of their pet's attributes.