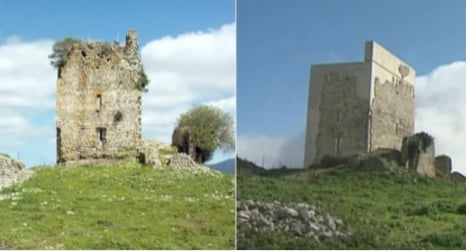 El Castillo de Matrera, in Cádiz, southern Spain was constructed in the ninth century and has been a National Monument since 1949.

But a recent restoration of the privately-owned castle has had locals and historians up in arms about what many of them class as a “botch job”.

The castle, which was built in the ninth century by Umar ibn Hafsun, a Christian anti-Ummayad leader in southern Spain, before being conquered by San Fernando.

By the fourteenth century it had fallen back into Muslim hands before being conquered definitively by Alfonso XI in 1341.

The site has been a National Monument since 1949 and was declared a Site of Cultural Interest by the Spanish government in 1985.

“The consolidation and restauration (so-called by the project’s architects)… is absolutely terrible,” the organisation Hispanianostra, which campaigns to preserve Spain’s cultural heritage, wrote on its website.

“No words are needed, you just need to look at the photographs,” it added.

The architect behind the restoration has defended the project; Carlos Quevado, told La Sexta that the aim was not to demolish the ruins but show, as best as possible, what the original castle would have looked like.

“The building has a very important historical value as well as architectural,” Quevado added.

Spaniards took to social media to criticize the project.

“A disaster of a project,” wrote one Twitter user.

Another Twitter user compared the restoration to the infamous Ecce Homo restoration, when Spaniard Cecilia Giménez decided to touch-up the painting, with disastrous results.