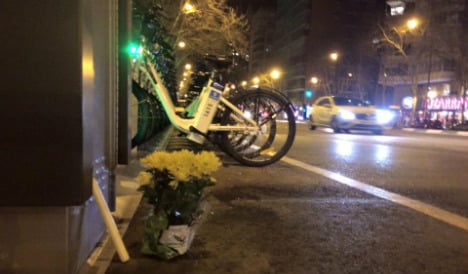 Photo: Madrid Ciclista / Facebook
The 32-year-old cyclist was knocked over at the BiciMAD docking station on Calle Alberto Alcocer late on Saturday night.

But the driver failed to stop and instead sped off, leaving the fatally injured Vela lying at the side of the busy road.

He was taken to  the Doce de Octubre hospital but died of his injuries there on Monday.

While police launched a manhunt for the culprit, fellow cyclists gathered at the spot where Vela was knocked down to pay tribute on Tuesday evening and to call for increased safety measures to protect Madrid’s bicycle users.

“United by the sadness, the death and the abandonment of the cyclist Javier Vela in Calle Alberto Alcocer. RIP,” read a tweet posted by Pedalibre with a photo of crowds gathering at the scene of the tragedy.

Cyclists complained that cars speeding along the straight stretch of road posed a danger to those attempting to park or retrieve cycles from the docking station.

Isabel Ramis, who writes the blog Muévete en Bici por Madrid posted a video of cars speeding past the exact spot where Vela was hit.

Police believe the driver was speeding or driving under the influence and are searching for the vehicle responsible for Vela’s death.

Campaigners have called for stricter enforcement of speeding limits on cars and for widespread cycle lanes to improve safety for cyclists on Madrid’s roads.

In June 2014, Madrid, a city of three million people, became the first major city to offer a shared bicycle scheme that used only electric bikes and it has proved hugely popular.