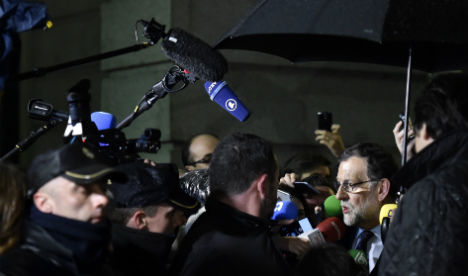 There appears to be little chance of Spain’s political stalemate being broken any time soon. Just listen to the divisive tone of parliamentary debates held in the first week of March – two-and-a-half-months after a national election failed to deliver a government.

Pedro Sánchez, leader of the Spanish Socialist Workers’ Party (PSOE) had sought to form a coalition government with the centre-right Ciudadanos (Citizens) Party. He secured the backing of his own party and his proposed coalition partner but failed to get enough support from other MPs following heated debate in the chamber.

In the end, he gathered just 131 votes – well short of the simple majority required to pass a vote in the 350-seat parliament. Crucially, the 69 deputies from left-wing collective Podemos blocked Sánchez’s bid to become prime minister by voting against him. Podemos leader Pablo Iglesias clashed with the Socialists during the debate. Photo: AFP

This is the first time in Spain’s 40 years as a democracy that a candidate standing for prime minister has failed to win the necessary parliamentary support. It now seems likely that fresh elections will be held in June. The only other option would be for the country’s politicians to display a capacity for compromise that has so far evaded them.

At first glance, it’s surprising that the largest party, Mariano Rajoy’s Partido Popular (PP), has not been able to piece together a coalition with smaller party Ciudadanos.

Rajoy was prime minister between 2011 and 2015 and has been acting as a caretaker in the role since the December election. Together the two parties have 163 seats – just 13 short of the 176 needed for an overall majority.

In the past, this shortfall might have been made good by calling on the support of the centre-right Catalan nationalists. They provided vital backing to minority PSOE and Popular Party governments in the 1990s, for example.

But those same Catalan nationalists have started to push so hard for independence from Spain that they cannot be considered acceptable allies for any of the parties hoping to form a Spanish government.

A PP-Ciudadanos coalition has also been scuppered by the antipathy displayed by Ciudadanos leader Albert Rivera towards Rajoy. It now looks like Rajoy’s resignation would be a prerequisite of any future understanding between the two parties.

A seemingly never-ending stream of corruption allegations, implicating senior members of the PP, up to and including Rajoy himself, has also deterred other parties from seeking an agreement with the party.

Rajoy has nevertheless indicated that he has no intention of stepping down. For the time being, he insists that being the leader of the largest party entitles him to stay on as caretaker prime minister, or at the head of a “grand coalition” of the PP, the PSOE and Ciudadanos.

The PP has 123 seats in parliament, which makes it difficult for any of the other parties to form a coalition government. As has been noted, Podemos’s willingness to vote alongside the PP against a PSOE-Ciudadanos coalition was sufficient to put an end to that initiative.

The obvious alternative is therefore a coalition of the left, the option favoured by Podemos. If the PSOE was able to put together a deal with Podemos and United Left (IU), it would have 161 seats. That would still be short of the 176 needed for an overall majority but would make a minority administration possible. But Podemos leader Pablo Iglesias is hostile towards doing a deal with the PSOE. At any rate, Podemos’s insistence that a referendum on Catalan independence be included in any coalition agreement effectively renders any accord between Sánchez and Iglesias impossible.

Sánchez, for his part, maintains that a cross-party deal of left and right – excluding the PP – is the only means of forming a viable government. Sánchez and his socialist deputies during the debate. Photo: AFP

And so the deadlock continues. Either the parties form a government within the next two months, and by 2 May at the very latest, or new elections will have to take place on 26 June. Based on their failure so far to put their differences aside, it seems unlikely that a government will be formed in that time.

Even then, polling suggests that fresh elections won’t break the deadlock either. It currently looks as though the PSOE will once again win fewer seats than the PP. It will, however, be interesting to see if voters reward Ciudadanos with greater support after its attempts to form a government with the PSOE. Similarly, Podemos could be punished by the electorate for blocking a government from being formed.

Spain is facing an uncertain future. The electorate has opted for change – albeit on the basis of a spectacularly fragmented set of general election results – but the bitter divisions between the major parties are preventing that change from taking place.