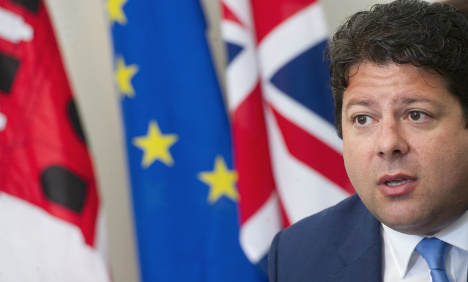 Believe me there is nothing romantic about our wanting to stay in the European Union. Thirty years ago politicians and commentators regularly stated that the Gibraltar ‘problem’ would be dissolved within a future Europe where sovereignty would have been pooled and redefined. Nothing of the kind has happened.

Firstly, we don’t see ourselves as a problem.

From 1704, when Britain with fellow Dutch troops captured the Rock in the name of Charles VI of Austria, Queen Anne hung on to the Rock and its people have been at the service of Britain since.

The century of sieges that followed capture must have felt worthwhile when Nelson,  his ships well victualled by his Jewish Gibraltarian friend Aaron Caldozo, secured the British fleet’s supremacy at Trafalgar in 1805 and with it the command of trading routes for the 19th century.

Our role in the Second World War and through the Cold War has seen our strategic value change, but we are still an important defence element because of the Rock’s position at the entrance to the Mediterranean.

The problem is that Spain has never been happy with its own history and, having agreed to us being British in perpetuity with the 1713 Treaty of Utrecht, Madrid has been trying to recolonise us ever since. Four years after General Franco cut off the Rock’s land frontier, pulled out telephone links and banned travel by sea and air, Gibraltar joined the EU with Britain in 1973. The gates remained closed to all but the dead until 1985 when Margaret Thatcher balanced her conviction that Spain must join the EU and NATO, with her defence of our EU rights. Just days ahead of Spanish accession the border was re-opened.

As a separate jurisdiction to the UK we have been required to implement hundreds of directives, some sheer red tape, many wholly irrelevant. Yet the discipline of compliance, especially in the areas of financial services, and the access to the single market, has been our making.

In the past thirty years we have moved on from being a fortress town with an economy that depended 70 percent on British military spending, some tourism and a being a so called tax haven, to become the most regulated financial centre of Britain’s many territories now meeting the standards of the City of London.

Our fortress and colonial architecture has become a tourism product, our new educated generations of Gibraltarians are modern Europeans, most with a university education from Britain.

Gibraltar has not had a penny of British aid in three decades. Instead we have met Mrs Thatcher’s challenge to us to convert the Rock into a successful, world class finance centre, to create a viable tourism product and turn the magnificent 19th century port into a commercial hub.  We even give proper jobs to 7,000 Spaniards who cross the border each day. Its about being European and working together. Gibraltarians feel as at home in Fulham as they do on the Rock and we are as much a part of the great British family as are Wales, Scotland, Northern Ireland and England.

I would hope that even the rather reactionary Popular Party that has been governing Spain would not see a Brexit as an opportunity to repeat General Franco’s whimsical gesture of closing the border.

We shall not surrender to bullying and if we ever faced another economic and political siege we would expect for Britain’s full support. Certainly, recent experience confirms that it was only when David Cameron and I appealed to the EU to intervene that Spain pulled back and reluctantly followed the rules, albeit not generously, to remove the oppressive controls it had imposed at the border.

So we see the EU as a framework for good.

One conundrum we face today is that a lot of our vast array of friends and well wishers in Britain – there’s invariably someone in the family who served in Gibraltar – are also people who are strongly inclined to leaving the European Union.

After a Brexit there would be uncertainty and undoubtedly a scramble to secure trade and other vital UK interests. Might Gibraltar become prey to pragmatism and horse-trading? I fully support the huge efforts David Cameron has made to put the EU back on course, focusing on trade and killing off federal fantasies.  This Prime Minister has proven that he is both principled and democratic. He has defended our right to self-determination and, just as he gave Scotland a meaningful referendum, so too Gibraltar will join with the United Kingdom in the referendum on June 23rd.

There are only 23,000 of us eligible to vote and I am confident that a large turnout will see most people voting to stay in. Its not a huge number. We alone cannot be the rock in David’s sling that will topple Euroscepticism. But we are passionately British.

None of us can go back to the days of Imperial might nor are we nostalgic for that.

For good reasons Europe’s 27 other states, some reluctantly, bent over backwards to keep Britain in.

Britain is stronger in Europe and so are we.

Fabian Picardo, leader of the Gibraltar Socialist Labour Party was elected Chief Minister of Gibraltar in December 2011. He was re-elected for a second four-year term in November 2015.