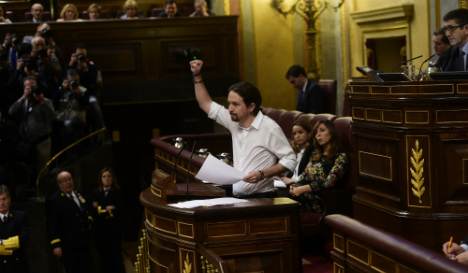 “We are not going to sign a blank cheque” for the Socialists, Podemos number two Íñigo Errejón told TVE public television.

Sanchez will try to win a vote of confidence in parliament on Friday to form a new government, with his chances very slim without support from Podemos.

A first attempt on Wednesday fell well short of the required absolute majority of the 350-seat lower house of parliament.

The December 20th election resulted in a hung parliament divided among the four main parties – none of which won enough seats to govern alone.

Acting prime minister Mariano Rajoy of the PP gave up attempts to form a government after he failed to win support from other parties fed up with years of crisis and corruption scandals.

He has already said that the most likely outcome given the current impasse is fresh elections in June.

Podemos is prepared to renew negotiations “from Monday”, said Errejon, adding that it was still possible to form a coalition government of the left, with the support or abstention of nationalists, and Basque and Catalan separatists.

The Catalan question is the gordian knot that is preventing a leftwing alliance.

Podemos and its regional allies are prepared to grant a referendum on self-determination in the northeast Catalan region.

However the Socialist Party (PSOE) is opposed and Sanchez has said he won't accept any threat to Spanish unity.

The political parties have until May 2nd to sort out a new government, failing which fresh elections will be organised for June 26th.