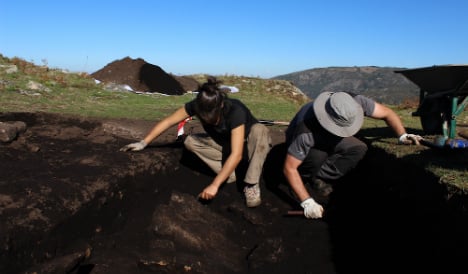 Ever dreamed of following in the footsteps of Indiana Jones and becoming a real-life archaeologist? Well now’s your chance!

Archaeologists in northwestern Spain are inviting adventurous travellers to join them for a week of learning hands-on about archaeology and taking part in the excavation of an Iron Age hillfort in Galicia on Spain’s Atlantic coast.

This hillfort (known as A Cabeciña – pictured below) is one of a series in the region, and has already provided evidence that the Celtic people who inhabited western Iberia during the Iron Age were interacting with Mediterranean traders long before the Romans arrived in the area. The excavation will take place over two weeks from October 10th to 23rd 2016 and amateur archaeologists can get involved in the project by sponsoring it on its crowdfunding site.

A mere £10 (€13) allows you to become a “digital participant” in the project, while £725 (€937) will buy you one week of on-site archaeological training, including food and accommodation.

No previous experience is required to join the school as all training will be provided on site by professional archaeologists.

The dig is being organized by DigVentures, a British company set up by three archaeologists who have gone on to pioneer crowdfunded archaeological projects.

Last year, preliminary excavations at A Cabeciña hillfort unearthed an hacha de talón – a type of bronze axe that was not used as a tool or a weapon, but was specifically made for trading.

“These axes were highly valued by Mediterranean people for the bronze they contained, and it looks like the indigenous people at Costa dos Castros were selling them in exchange for other goods like jewellery and exotic pottery,” said project manager Xosé Gago in a statement to The Local.

Locally known as Costa dos Castros (Coast of the Hillforts), the region developed during the late Bronze Age and flourished in the late Iron Age, until it was subsumed by the arrival of the Romans, and is named for the unusual density of hillforts that line its shores. Archaeologists have so far identified 12 within a narrow seven kilometre stretch. According to Carlos Otero, archaeological director, “it is impossible to understand the hillforts of Atlantic Europe without exploring the connections these Iron Age people had with Mediterranean traders. There was a lot more contact than many people realize, and the influence that these two cultures had on each other is a story that remains relatively unexplored.”

“With so many hillforts in such close proximity, Costa dos Castros is an excellent place to investigate Atlantic and Mediterranean connections, but also the question of why these Iron Age people built so many different hillforts in such close proximity. We also have clear construction phases, which means we can study how they evolved,” said Otero.

Previous finds at the site have included local Iron Age pottery, imported Punic and Roman pottery, an iron axe, fibulae, and an archer’s wrist guard. A series of tightly packed, domestic roundhouses were also found to have been built within the walls of the hillfort.