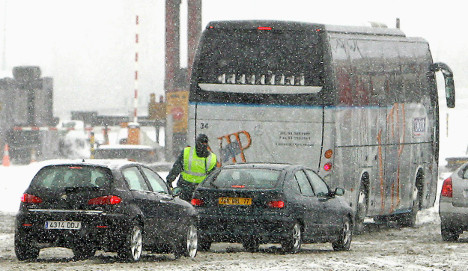 Former convicted members of Basque separatist and terror group Eta were travelling with family members through the northeastern region of Navarra, which borders the Basque country, on Saturday when they got stuck in a snowstorm.

The group of more than 20 people had been leaving a visit to a cider bar when at around 8.30pm, the heavy snow prevented them from driving their buses away, a Guardia Civil spokesman told The Local.

At first the group called the regional emergency services, but were told that rescue workers were overwhelmed and had to prioritize the main roads.

The former Eta members then called the local police, who advised that the Guardia Civil were better equipped to help them.

When the group called the Guardia Civil, the agency sent out two patrol cars – unaware that they were going to rescue people formerly involved with Eta, which has killed more than 200 Guardia Civil officers over the past five decades.

“We knew that it was a gathering, but we had no knowledge of who was there,” the Guardia Civil spokesman explained.

Upon finding the trapped travellers, the officers decided to call in more vehicles to transport them to Pamplona.

It wasn’t until they were on the way to Pamplona that one of the passengers revealed to the officers that part of the group had been members of Eta, the Guardia Civil told The Local.

“This does not mean anything to us in particular. We are an agency that helps all citizens,” the spokesman told The Local. “It is a curious situation, but it is our obligation to help every citizen, in any situation.

“It is not strange for us, though it might seem so for others.”

Founded in 1959, Eta has been linked to more than 800 killings, the biggest target of which have been Guardia Civil officers with 203 dead. The last attack by the group in Spain was in 2010.

On Thursday, the Guardia Civil also posted a Facebook message in response to media coverage of the rescue.

“It has been 172 years that the Meritorious [Guardia Civil] has been in operation, but today more than ever the Doctrine of the Guardia Civil (1895) continues to serve us as a guide,” the post states, continuing with a quote from the official doctrine.

“The Guardia Civil should not be feared, except for by wrong-doers, nor be frightening, except for to enemies of order. It will always seek to give a good outlook to the afflicted… And finally, the guard should always safeguard the property and security of all.”

The post was shared more than 300 times just hours after it was written.

Earlier this week, veteran Basque leader and former member of Eta Arnaldo Otegi was released after serving six and a half years in prison for trying to resurrect the outlawed separatist party Batasuna.

Otegi is credited with helping end violence in the northern Spanish region, participating in failed peace negotiations between Eta and the Spanish government, but he also previously served time for the 1979 kidnapping of a factory director in Vitoria.