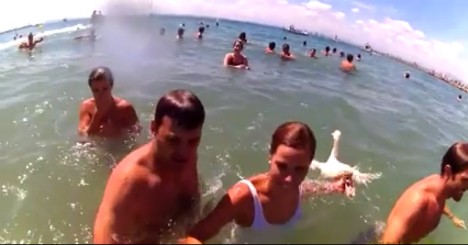 The woman repeatedly swings the duck at the activist. Photo: Animal Rescue España

The town of Roses in Catalonia has voted to ban what has to be one of Spain’s most unusual – and controversial – festivals.

The annual “duck chase” is held every August in the seaside town, during which ducks are thrown into the Mediterranean and then caught and brought back to shore by swimmers.

The event caused a stir last year when a woman attacked an animal rights campaigner with a duck, holding it by the legs and repeatedly hitting him with the animal.

Now the town council in Roses has approved a motion to ban the tradition, which has been celebrated in the town for 97 years.

The vote was close, in the end approved with eight votes in favour, seven against and one abstention.

“Times change and society is going down a different path,” said mayor of Roses, Montse Mindan, who had campaigned for the ban.

The duck throwing festival has been celebrated for nearly a century in the coastal town, during the August Festa Major festivities.

Ducks are thrown into the sea from a boat, where they are chased and caught by bathers, who receive a prize when they take the animals to the shore.

“These celebrations are extremely controversial, since they are now considered to be cases of animal abuse, and are celebrated every year among protests,” the motion to ban the practices read.

“A large portion of society no longer accepts the use of animals in entertainment and the protection of animals is an important value for today’s society.”

Bull runs, where people run ahead of a pack of half-tonne fighting bulls, are a part of summer festivals across the country – the most famous during the San Fermin feria in Pamplona.

But towns and cities across the country are increasingly becoming more vocal about animal rights.