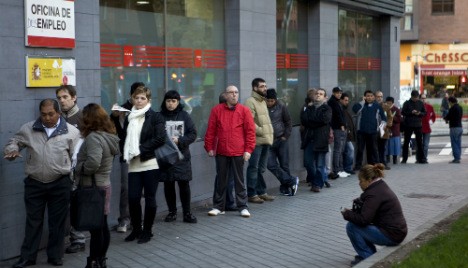 Spain's unemployment queue inched up slightly in February, the government said on Wednesday, due mainly to a rise in the number of jobless in the agriculture sector.

The number of people registered as unemployed rose month-on-month by 2,231 people, or 0.05 percent, to 4.15 million in February, the Labour Ministry said in a statement.

It was the first increase in the number of jobless during the month of February since 2013.

The number of jobless in the agriculture sector rose by 14,029 people but fell by 6,724 people in the construction sector and by 9,753 people in the services sector.

The unemployment rate registered a record fall last year, dropping nearly three percentage points to 20.9 percent, although it still remains the highest rate in the eurozone's after Greece's.

The Spanish economy, the eurozone's fourth largest, expanded by 3.2 percent last year, one of the fastest rates in Europe.