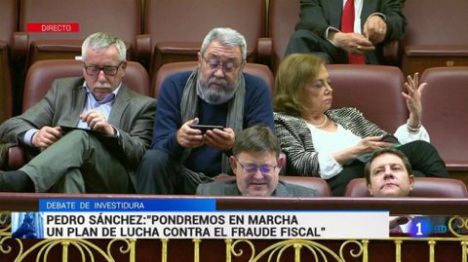 The parliamentary session is a key step towards trying to end nearly 11 weeks of political stalemate since December's elections produced a parliament split between four main parties – none of them with enough seats to govern alone.

Designated by the king as prime ministerial candidate after conservative acting leader Mariano Rajoy pulled out, Sanchez has raced to put together a coalition government before the session, which will spill into Wednesday when the vote of confidence takes place. “We have before us the possibility to create a government of change,” he said as he pleaded for lawmakers' support.

He then outlined a series of progressive measures a Socialist-led government would enact, such as a minimum wage hike and a gender wage gap law.

“Why not start enacting all of this beginning next week?” he asked the chamber.

But his audience was far from captive, one shot from the television coverage showing the leaders of Spain's two biggest trade unions playing on their phones and tablets, while the woman pictured next to them found her fingernails more riveting than Sanchez's speech.

After weeks of negotiations and ping-pong televised statements, he sealed a deal last week with Ciudadanos, which came fourth in the elections with 40 seats.

But Podemos, which with its 65 seats would be a valuable partner for Sanchez, immediately suspended talks with the Socialists over the agreement, which it considered too liberal.

The PP meanwhile has said it will vote against any government it does not lead this week.

Sanchez could still go through if Podemos and other smaller groupings abstain from casting their ballot – a move they have so far rejected.

But after Sanchez's address to parliament, Podemos's number two Inigo Errejon said the party's position had not changed.

“Only Ciudadanos will support Sanchez,” he said.