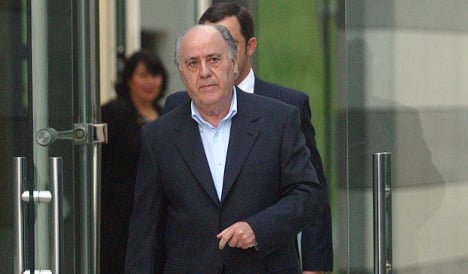 Forbes magazine released its list of the world's richest people on Tuesday, with Bill Gates topping the charts.

And while familiar superstars like Mark Zuckerberg and Warren Buffet also ranked highly, there was one name that you might not recognize: Amancio Ortega.

While you may not know much about the Spaniard who is now the world's second-richest man, you've probably at  least walked past, if not into, one of the more than 2,000 Zara stores worldwide that have made him his fortune.

But just who is this Iberian billionaire? The Local takes a look at the five things you should know about Amancio Ortega.

1. He's worth $67 billion, and has (temporarily) topped Bill Gates

But for a glimmering moment in back in October, Ortega actually beat Gates in Forbes' real-time wealth calculator when he was worth a dazzling $1.7 billion more than the tech whiz turned generous philanthropist.

But alas, his sparking moment on top of the world of billionaires was just for a few hours.

The 79-year-old Ortega was born the son of a railway worker on the cusp of the Spanish Civil War in 1936 in Busdongo de Arbás, León. He moved to A Coruña in Galicia with his father as a teenager and at 13, he dropped out of school and took a job at a local shirt maker.

Eventually he started making bathrobes and lingerie with his first wife, Rosalia Mera, in their living room before opening the first Zara in 1975.

Ortega expanded his retail empire into the United States in 1989 and his fashion group Inditex also includes Stradivarius, Pull and Bear, and Bershka.

Unlike Bill Gates who has appeared in TV shows, commercials and talk shows, Ortega maintains a much lower profile.

He almost never gives press interviews, seems to hate wearing ties and is said to eat often in the staff canteen with his designers, fabric experts and buyers for Zara.

Amancio Ortega shares food, quite often, with his employees at Zara Logistics.

Until 1999, the only picture published of Ortega was an old ID card.

He also supposedly goes to the same coffee shop every day in A Coruña.

“In the street, I only want to be recognized by my family, my friends and people I work with,” he once told Covadonga O'Shea, the journalist who wrote his biography.

4. He's been raking it in throughout the financial crisis

While the rest of Spain has been slowly suffering since the start of the 2008 financial crisis, Ortega has somehow “powered through,” personally gaining $45 billion between 2009 and 2014 with the success of Inditex shares on the stock market, according to Forbes.

And despite stepping down as chairman of Inditex in 2011, he still rakes in more than $400 million annually through dividends.

His continued success is what helped him shoot up from fourth-richest person in 2015 to number two this year.

5. He first wanted to name Zara after 'Zorba the Greek'

You'd be shopping in a store named after a fictitious Greek man if it weren't for one small detail: A bar owner down the street from Ortega's first store had also felt inspired by the 1964 film to name it Zorba, a Zara spokesperson previously told the New York Times.

Not wanting to confuse locals with two Zorbas, Ortega started playing with the letters of the name to come up with Zara.