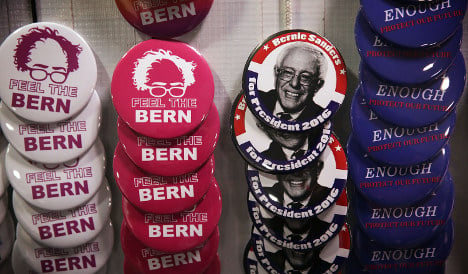 Democrats living in Spain voted overwhelmingly for Bernie Sanders in the first of several “Global Primaries” in Spain on Super Tuesday.

More than 550 people turned out to vote in Madrid and Barcelona, with 323 Madrid voters choosing Sanders and 85 Barcelona expats also choosing the Vermont senator. Hillary Clinton received 107 votes in Madrid and 36 in Barcelona.

But these results are only the first round and Democrats living overseas still have until March 8th to cast their ballots.

“We are very pleased with the turnout,” Democrats Abroad Spain Chair Gil Carbajal told The Local. “I expected Sanders to win, but not by so much.”

Carbajal added that they saw many more people show up on the first day of voting this year, compared to the heated fight between Clinton and Barack Obama in 2008: 334 voted in Madrid in that election.

Unlike Republicans, Democrats who live abroad get their own primary with the group Democrats Abroad, which is given state-level recognition in the Democratic National Committee.

The group will send 13 delegates and eight super-delegates this year to the Democratic National Convention, which is more than the state of Wyoming's total of 18.

Since 2008, the Democratic party has allowed its international branch to host a Global Primary where expats can vote in-person

The Global Primary will continue around the world until March 8th and three more voting events are still set to be held in Spain: one in Barcelona on Saturday and two more in Madrid on Saturday and Sunday.

READ: Where and how to vote as an American expat in Spain

Sanders' pull with expats and 'the rise of Trump'

While Sanders has so far swept the ballots in Spain, across the pond Clinton celebrated a victory of winning seven state primaries out of 11 on Super Tuesday, adding to her lead so far over Sanders.

Carbajal noted that the results for voters in Spain could still shift once mail-in ballots are received and after the voting events this weekend, but that Sanders does seem to have a leg-up with expat voters.

“It does remind me of the breakdown of Obama and Clinton in 2008 where an overwhelming number of Democrats Abroad voted for Obama. It looks like Sanders is likely to win this time around,” he said.

“But people are divided, even young people, between the more idealistic and more pragmatic choice.”

Part of Sanders appeal overseas could be his pull with younger voters, Carbajal added, observing that Spain has a growing population of young American English teachers and students.

Americans living in other countries also seem to have a different outlook due to their experiences, he said.

“Living abroad gives you another perspective,” Carbajal told The Local. “It does sort of remove you, depending on how much you pay attention to what's going on in the States and it does condition you more ideologically.”

But another candidate's success back in the States has voters in Spain concerned, Carbajal said.

“Everybody, especially senior members, are following the events and are concerned about the rise of Trump,” he explained.

“You would expect the urgency to be more important, with the Constitution and the Supreme Court nominee at stake… these things should let people know that their vote counts.”