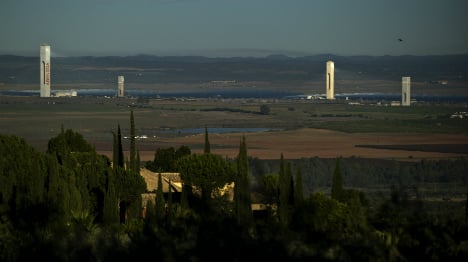 The Seville-based company reported the loss a year after posting a net profit of €125 million, an increase of 24 percent compared with that of 2013.

The world player in solar and wind power, biofuels and water management had in November announced it was close to bankruptcy following years of unsustainable expansion.

It filed for protection from creditors and has until March 28th to find a solution to its colossal debt, which stands at nine billion euros at least.

The firm said talks were continuing with its creditors in order to restructure its debts and give it “a new financial structure that will allow it to continue with its activity in a competitive way”.

“Abengoa trusts that, with the support that has been shown by its creditors for a solution, an agreement will be reached,” a company statement said.

The group highlighted a “general slowing down, or even paralysis in some cases, of all of Abengoa's activities since the start of August, and particularly in the last quarter of 2015.”

In January, the firm announced a recovery plan which would involve selling its assets in the biofuels sector and focusing on its engineering and construction activities.

Under the plan, Abengoa is speeding up the sale of non-strategic assets.

It has sold the shares of a 100 megawatt thermal-solar power plant in United Arab Emirates and has reached an agreement to sell its former headquarters in Madrid, it said.

The company, which operates solar power plants and has renewable energy projects spanning four continents, generated 86 precent of its turnover last year outside of Spain.

Spanish unions and politicians are increasingly concerned about the fate of the 70-year-old firm, which employs 28,700 people around the world, including 7,000 in Spain.

Prime Minister Mariano Rajoy's acting conservative government which has slashed spending and raised taxes to reduce a the public deficit, has ruled any state bailout for the firm.