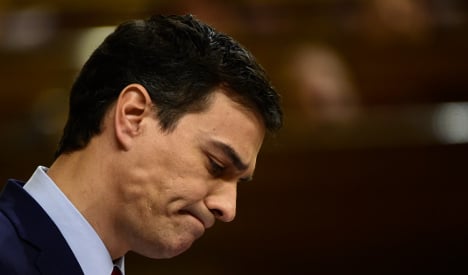 The parliamentary session is a key step towards trying to unblock nearly 11 weeks of political stalemate since inconclusive December elections resulted in a hung parliament divided among four main parties – none of which won enough seats to govern alone.

Designated by the king as prime ministerial candidate after acting conservative leader Mariano Rajoy pulled out, Sanchez has raced to put together a coalition government before the session, which will spill into Wednesday when the vote of confidence takes place.

“We tried to unblock the situation and at the same time forge a government of change,” Sanchez said on Monday.

But barring any unexpected changes of heart, Sanchez only has the support of centrist upstart Ciudadanos and the tiny regional Canaries' Coalition, giving him just 131 votes in the 350-strong lower house – not enough to see him through.

If he fails, Spain will be plunged into uncharted territory.

It would be the first time since the country returned to democracy following the death of dictator General Francisco Franco in 1975 that the candidate designated by the king did not get enough backing from parliament to form a government.

A two-month countdown will then start from the beginning of the week, during which the wildly diverging parties will try once again to come to an agreement to govern Spain.

Failing that, new elections will be called in June – an issue of concern at what right-wing daily El Mundo calls “the worst political time for Spain in three decades”.

Unions and business leaders have urged political leaders to reach a deal for a stable government quickly as Spain emerges from a severe economic crisis, and also faces an independence threat in the northeastern region of Catalonia.

But that is easier said than done.

Hailed as a major step forward for democracy, the initial euphoria quickly evaporated when it became apparent that parties with differing agendas – and unused to compromise – were going to struggle to work together for a coalition government.

Rajoy gave up attempts to form a government after he failed to get support from other groupings fed up with years of crisis-sparked austerity and corruption scandals plaguing his grouping.

So King Felipe VI asked runner-up Sanchez, whose Socialists scored their worst result in history with just 90 seats out of 350, to form a government.

After weeks of negotiations and ping-pong televised statements, he sealed a deal last week with Ciudadanos, which came fourth in the elections with 40 seats.

But anti-austerity Podemos, which with its 65 seats would be a valuable partner for Sanchez, immediately suspended talks with the Socialists over the agreement, which it considered too liberal.

The PP meanwhile has said it will vote against any government it does not lead this week.

Sanchez, with his 131 assured votes, could still go through if Podemos and other smaller groupings abstain from casting their ballot – a move they have however rejected.

The party may be interested in allowing the Socialists to govern with Ciudadanos while it “gains protagonism in parliament in the opposition” with eyes on the next election, Fernando Vallespin, political scientist at the Autonomous University of Madrid, told AFP.