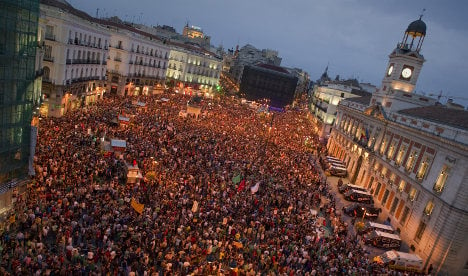 A protest by the "indignant" group in Madrid's Puerta del Sol in 2012. Photo: Pedro Armestre/AFP.

The plaque will be placed in the bustling Puerta del Sol, where the movement was born, in time for the fifth anniversary on May 15th, city officials confirmed last week.

May 15th 2011 marked the start of the anti-austerity protests that have since seen millions of Spaniards take to the streets, demanding change to Spanish policies since the economic crisis.

The movement called for better measures to combat high unemployment rates and denounced the dominant two parties: the conservative Popular Party (PP) and Socialist PSOE. It also helped give rise to the current third-largest party in the Spanish Congress, Podemos, as well as various local parties.

The plaque will read “We were sleeping, we woke up”.

The plaque was agreed to by the Ahora Madrid, Socialist PSOE and Ciudadanos parties of the capital in November and opposed by the conservative Popular Party (PP).

“I don't know to what extent plaques are very important, but what is extremely important is to recognize the role that this young movement had in regenerating democracy,” Madrid mayor Manuela Carmena said when the plan for the plaque was adopted, according to El Pais.

But opponents of the plaque  have said that it shows disrespect to people for whom other monuments have been made, including the 191 victims killed in the 2004 Madrid terrorist bombings. A plaque for honouring those who died then is displayed on a wall of the old post office building in Puerta del Sol.

President of the Community of Madrid, Cristina Cifuentes called the new plaque a “joke in poor taste,” according to El Pais.

“It would be an offense to the victims,” she said.