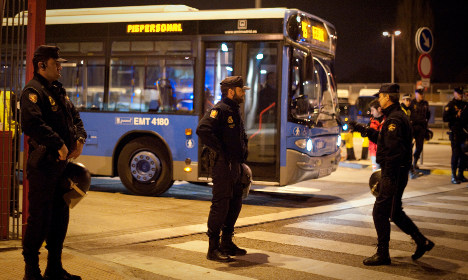 Five young men boarded Ángel's bus on Saturday and started to harass two women sitting at the back, according to Spanish daily El Confidential.

The driver decided to stop the bus and scolded the group for their actions in an attempt to get them to leave the women alone – but that's when they turned their attention on him instead, pulling a shirt over his head and punching him repeatedly.

The bus company EMT wrote on Twitter that they “condemned” the attack on Ángel but that he remained in “good condition”. They also noted that one of the suspects in the attack had been caught.

Three men had been arrested as suspects as of Monday, according to El Confidential, all of whom were between the ages of 19 and 23. One of the men was identified because he had left his ID card on the bus. The others were found through bus surveillance footage.

EMT director Álvaro Fernández Heredia told reporters that Ángel was still “nervous” following the attack and was “recovering with bruises on his torso, back and head”.

Fernández added that though Ángel felt “psychological shock” after the incident, he said he wanted to prevent “male chauvinist aggression” and “would do it again”.

Ángel has received an outpouring of support on social media from across the city, with some calling him a “hero”.

“Thank you to EMT Madrid driver Miguel Ángel for confronting male chauvinist violence,” wrote Madrid mayor Manueal Carmena on Twitter. “We should all be like him: don’t let these things happen.”

“The EMT driver who was attacked, Miguel Ángel, deserves an official prize for being a good citizen and serving the public,” wrote a neighbourhood branch of Carmena’s party, Ahora Madird.

President of the Community of Madrid and conservative Popular Pary leader, Cristina Cifuentes, called on the National Police to take action against those who hurt Ángel.