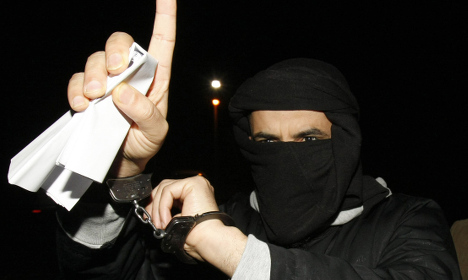 US authorities say Damache (above) and others recruited men online "to wage violent jihad in South Asia and Europe". Photo: Peter Muhly/AFP

Ali Charaf Damache, who holds both Algerian and Irish nationality, was detained in December in Barcelona.

US officials say Damache worked with Colleen LaRose — a Pennsylvania woman who converted to Islam and took the name Jihad Jane — and others to create a “violent jihad organisation” with men and women from Europe and the United States.

LaRose herself was jailed for 10 years in 2014 for plotting attacks, including the murder of Swedish artist Lars Vilks, who has survived several death threats since penning a cartoon portraying the Prophet Mohammed as a dog.

US authorities say Damache and others recruited men online “to wage violent jihad in South Asia and Europe” as well as women with passports and the ability to travel to and around Europe in support of their plots.

Spain's cabinet approved his extradition during its regular cabinet meeting on Friday.

Damache had refused to be extradited to the United States, where he faces up to 45 years in prison if convicted.

He had initially been detained in Ireland where he was living, but a court there refused a US request to extradite him and he walked free.