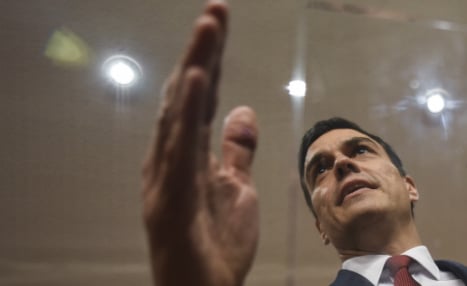 As the country emerges from an economic crisis and faces an independence threat in the northeastern Catalonia region, it still does not have a government, nearly 10 weeks after elections produced a hung parliament.

Socialist chief Pedro Sanchez has been racing to garner backing for a coalition government.

But as a March 1st deadline approaches for a crunch parliamentary session in which lawmakers will vote for or against his government programme, Sanchez only has the support of centrist upstart Ciudadanos and the regional Canaries' Coalition – not enough to see him through.

“The most probable result is that Pedro Sanchez will be defeated,” says Pablo Simon, politics professor at Madrid's Carlos III University

If Sanchez fails, a two-month countdown will start from the beginning of next week when the vote takes place, during which the wildly diverging parties will try once again to come to an agreement to govern Spain.

Failing that, new elections will be called in June – an issue of concern at what right-wing daily El Mundo calls “the worst political time for Spain in three decades”.

“We spent so many months hearing that the good thing about these elections was that it would finally put an end to the two-party system, that this was the moment for dialogue,” says Manuel Cruz, philosophy professor at the University of Barcelona.

“And it may turn out that political forces aren't capable of seizing this opportunity… That would be a failure on the part of all parties, including the emerging ones,” he added in a video interview on the El Confidencial news site.

The party's leader, acting prime minister Mariano Rajoy, gave up attempts to form a government after he failed to get support from other parties fed up with austerity and corruption scandals plaguing his grouping.

King Felipe VI then asked runner-up Sanchez, whose Socialists won 90 seats out of 350, to form a government.

After weeks of negotiations, he sealed a deal on Wednesday with Ciudadanos, which came fourth in the elections with 40 seats.

But anti-austerity Podemos, which with its 65 seats would be a valuable partner for Sanchez, immediately suspended talks with the Socialists over the agreement, which it considered too liberal.

The PP meanwhile has said it will vote against any government it does not lead next week.

This means that Sanchez only has the assured backing of some 130 lawmakers out of 350, which could have worked if Podemos and other smaller groupings abstained from casting their ballot – a move they reject.

Simon, however, believes this is not the end for Sanchez if he manages to secure the backing of other smaller left-wing or regional groupings during the two-month countdown.

Podemos, he reasons, would then have no option but to abstain in another vote rather than become known as the party that scuppered attempts to put together a government, precipitating new elections.

“Podemos could be plotting that the best thing would be to abstain to stay in the opposition, and make Pedro Sanchez's life more difficult from parliament,” says Simon.

Others though believe that the Syriza ally, which wants to supplant the Socialists as the country's main left-wing party, is keen on new elections where it would likely steal more votes away from Sanchez's grouping.

And what of the PP?

Rajoy, who had wanted to set up a “grand coalition” of his PP, the Socialists and Ciudadanos, has made no secret that he believes new elections will be held, as he told his British counterpart David Cameron last week.

“Rajoy's idea is… that weakened Socialists – probably without Pedro Sanchez – will have no other option but to get into the grand coalition, threatened or overtaken as they may be by Podemos,” writes the conservative ABC daily.

But that's not counting with pressure from business leaders, who earlier this week warned that new elections would be an “incomprehensible failure.”

And even more significantly, there is pressure from within his own PP to revamp a grouping increasingly ravaged by graft scandals which many believe would cost it dearly in new polls.

As if to echo this concern, prominent party spokesman Pablo Casado said publicly this week that he was “fed up.”