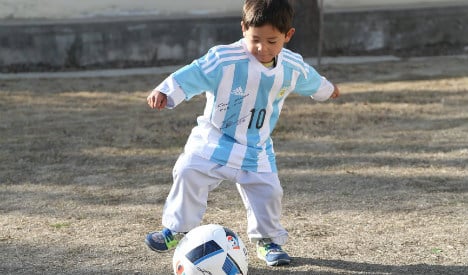 A photograph of five-year-old Murtaza Ahmadi playing football in a Number 10 Messi football shirt made out of a plastic bag was shared around the world, even attracting the attention of the Barcelona player himself.

Now Ahmadi has got his hands on his very own official shirt, signed by Messi, who has been crowned the world’s best footballer five times.

The boy was sent an official Argentina shirt and football from the Barcelona player and UNICEF ambassador, the UN body confirmed on its Afghan website.

“As of today, Murtaza Ahmadi can proudly show off the new signed jersey and a football he received from UNICEF Goodwill Ambassador Leo Messi,” said the message on the Facebook page of Unicef Afghan. “Murtaza's photo went viral after he was pictured wearing an Argentine National Team soccer jersey made from a plastic bag with ‘Messi’ and the number ’10’ penned on the back (pictured above).