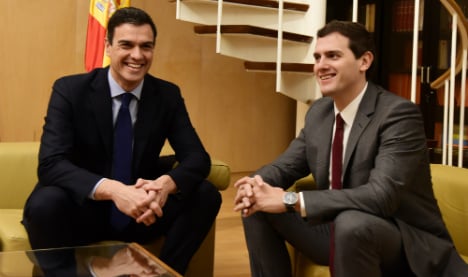 Spain's Socialists, racing to try and form a minority coalition government following inconclusive elections, on Wednesday got their first pledge of support after signing a deal with centrist party Ciudadanos.

The deal is a boost for Socialist leader Pedro Sanchez as he seeks enough backing from lawmakers to become Spanish leader when they vote for or against his government programme next week.

But it still leaves him short of the votes needed, which means Spain still has no government in sight nearly ten weeks after elections.

“There is a first deal with Ciudadanos, there are way more groupings that can make (Sanchez's) investiture possible,” the Socialists' Senate spokesman Oscar Lopez told Spanish radio.

Sanchez and Ciudadanos chief Albert Rivera shook hands to applause after signing the agreement, which centres on what a new government led by the Socialists would look like.

It includes major territorial and judicial reforms, including changing the constitution to, for instance, modify rules governing lawmakers' immunity from prosecution – demanded by Rivera in return for backing Sanchez.

Spain has been mired in political deadlock since December elections resulted in a hung parliament split among four main parties – none of which have enough seats to govern alone.

The ruling conservative Popular Party (PP) won the most seats but without an absolute majority, and leader Mariano Rajoy gave up attempts to form a government after he failed to get support from other parties fed up with corruption scandals plaguing his grouping and years of austerity.

As a result, King Felipe VI nominated runner-up Sanchez, whose Socialists won 89 seats out of 350, as prime ministerial candidate and he has been negotiating hard since then.

But even with Ciudadanos, which won 40 seats, Sanchez would still not have enough votes and would therefore need the backing of other parties – a difficult task as all have conflicting agendas.

Anti-austerity party Podemos, an ally of Greece's Syriza, won 65 seats and would therefore be a valuable partner.

But the long-established Socialists are wary of joining forces with an upstart party born just two years ago out of anger over austerity, and which ultimately seeks to supplant it.

Although it does not want to see Spain split, Podemos backs the idea of a Scotland-style referendum in the northeastern region. Sanchez, however, is resolutely against this.

And crucially, it refuses to enter a government that would also include Ciudadanos, pushing instead for a left-wing coalition with Podemos chief Pablo Iglesias as deputy prime minister.

The PP meanwhile has said it will vote against any government it does not lead.

As such, Sanchez still faces an uphill struggle to succeed next week.

Iglesias highlighted this earlier when he said the deal between the Socialists and Ciudadanos meant “Spain was very far from having a new government and new prime minister.”

Sanchez needs an absolute majority – or 176 ballots in favour of his government proposal – in the first vote of confidence due to take place on March 2nd.

That is almost certain to fail, which means that another vote will be held 48 hours later, where Sanchez will only require a simple majority.

The Socialists are hoping Podemos and other smaller groupings will abstain in that vote rather than cast their ballot against them, which would push Sanchez through.

But if that is also unsuccessful, a two-month countdown begins from the date of the first vote, after which new elections will be called if no solution is found.

But as Spain emerges from a severe economic crisis, many say fresh elections would be a disaster for a country that needs stability, particularly as polls suggest the outcome of new polls would by and large be the same as December.

On Tuesday, Spanish business leaders warned that going to the polls again would be an “incomprehensible failure.”

“We support any formation of a stable political compromise,” major business associations said in a joint statement.