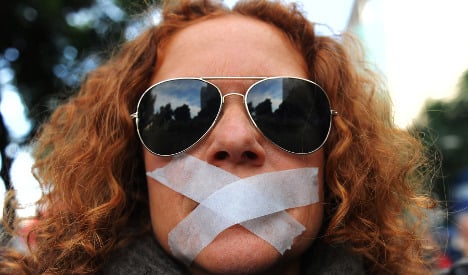 The campaign organization released on Wednesday its annual human rights report for 2015-16, declaring that the year “saw a global assault on people’s basic freedoms, with many governments brazenly breaking international law and deliberately undermining institutions meant to protect people’s rights” – and that includes in Spain.

“Spain also participates in this tendency to cut back on liberties and rights,” the report states.

The Local looks at the biggest human rights concerns Amnesty International has for Spain.


Spaniards have been protesting as the country's new “gag law” comes into force. Photo: Dani Pozo/AFP

Spain implemented a new public security law in July, dubbed the “gag law” for its crackdown on peaceful protests, social media and even photographing police. Fines range from €100 up to €600,000 for violations.

The laws “provide for offences which may disproportionately limit the legitimate exercise of the rights to freedom of expression and peaceful assembly,” Amnesty International wrote in the report.

READ: The ten most repressive points of Spain’s gag law

The law was pushed through by the conservative Popular Party of Prime Minister Mariano Rajoy after years of mostly peaceful anti-austerity protests.

2. Mistreatment of refugees and immigrants

Despite Spain’s pledge to take in nearly 15,000 asylum-seekers under a European Union plan to redistribute refugees that arrive in member states, Spain offered just 130 resettlement places in 2015.

Amnesty criticized Spain for its poor treatment of immigrants and refugees trying to enter the country, particularly in its north African enclaves of Ceuta and Melilla. There, Guardia Civil officers have been conducting collective expulsions, forcing groups back to Morocco “without any individualized assessment of their situation and without affording them an opportunity to claim asylum,” Amnesty wrote.

Part of the gag law reforms also paved the way for migrants caught illegally entering Melilla or Ceuta to be collectively expelled, which is “prohibited by international law,” Amnesty noted.

The report also condemned investigations into Guardia Civil officers who were caught on video beating a migrant trying to climb over a border wall between Melilla and Morocco and then dragging him to the Moroccan side. The investigation was closed because officials said they could not identify the officers and an appeal has been pending.

Amnesty also criticize an investigation into Guardia Civil officers who fired rubber projectiles and smoke canisters at 200 migrants trying to swim from Morocco to Spain at Tarajal beach in Ceuta. At least 14 people drowned, and officers denied that their actions contributed to the deaths. The investigation was closed without any charges.

Asylum seeker accommodations in Melilla and Ceuta are also a problem, Amnesty explains. Many wait at least two months before they can be transferred to the mainland and facilities are overcrowded with poor medical and psychological care, Amnesty states.

Spain's Ministry of Health reported that 56 women were killed by current or former partners last year.

Domestic violence is a major concern in Spain as the country has fought to combat its “machista” reputation. More than one million cases of domestic violence have been dealt with by the Spanish courts since 2007 and judges have handed down jail sentences to 148,000 men.

Amnesty encouraged Spain to offer women more in terms of redress and protection and to train officials better in dealing with victims of domestic violence. It also echoed the UN's call to compensate a woman whose seven-year-old daughter was killed by her abusive father after authorities failed to act on numerous complaints from the mother.

READ: The truth about domestic violence in Spain

Amnesty argues that Spanish law includes a too broad definition of what constitutes an act of terror and “could result in disproportionate restrictions on lawful exercise of freedom of expression”.

This issue came to a head recently when puppeteers in Madrid were detained after using play-on-words on banned Basque separatist group Eta. The two were later released under conditions following public outcry.

“What happened with the puppeteers is an example of how the broad definition of terrorism can impose a disproportionate limit on the freedom of expression,” said Amnesty International Spain’s director Esteban Beltrán in a statement.

Amnesty also denounced Spain's “incommunicado” detention for holding terrorism suspects, which entails limited access to a lawyer, family members or an independent doctor. Human rights groups like Amnesty and Human Rights Watch have said that this method may even facilitate torture.

The Spanish Senate passed a law last year that requires girls under 18 and women with mental disabilities to have a parent's permission before getting an abortion.

Amnesty reiterated concerns from the UN and other groups that Spain should instead “ensure no legal barriers force women to resort to clandestine abortion, putting their lives and health at risk”.

Evictions have been a major topic of discussion in Spain since the economic crisis hit the country particularly hard. More than 570,000 foreclosure procedures were launched between 2008 and 2014 and 52,350 new foreclosure cases were started within the first nine months of 2015.

Amnesty wrote that government measures meant to improve the situation were “failing to ensure an effective remedy for those whose right to housing may have been infringed”.