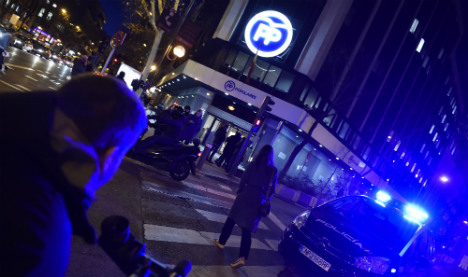 Jose Manuel Moreno, IT manager for the conservative PP, told a judge he had been ordered to destroy potentially compromising hard-drives used by former treasurer Luis Barcenas, in a 2013 probe over alleged illegal financing of the political party.

He admitted having reformated them “35 times, scratched and thrown them away,” although he said the hard-drives were empty in any case before he tampered with them, according to judicial sources.

On the same day, police detained Alfonso Grau, former PP deputy mayor in the eastern city of Valencia where a dozen party members have already been charged in a case surrounding alleged commissions in exchange for public work contracts.

These are just the latest in a series of allegations that have embarrassed the PP over the years, and cost them votes in December elections that saw the party lose its absolute majority.

Acting PP Prime Minister Mariano Rajoy tried to get support from other parties that won seats to form a coalition government but failed, prompting the Spanish king to nominate runner-up Pedro Sanchez, the Socialist party chief, as the candidate for prime minister.

Sanchez is currently negotiating with other parties to form a government ahead of a parliamentary vote of confidence on March 2nd, but Rajoy believes the socialist will fail and has not given up hope of getting support of his own.

But the corruption allegations have left the PP's rare allies wary, including upstart centre-right party Ciudadanos, which came fourth in the elections and had until now refused to join the chorus of critics.

Ciudadanos chief Albert Rivera – who has been courted by both Rajoy and Sanchez – denounced Monday what he said was “like a mafia system.”

“I do not intend to rely… on a political party that doesn't clean things up,” he told Spanish radio.

Even within the PP itself, prominent members are starting to call for a “purge” of the corrupt, like party spokesman and lawmaker Pablo Casado who said Monday he was “fed up.”

But acting Interior Minister Jorge Fernandez Diaz criticised the timing of these revelations, casting doubt on this “proliferation of judicial initiatives” implicating the PP at a sensitive time for Spain.