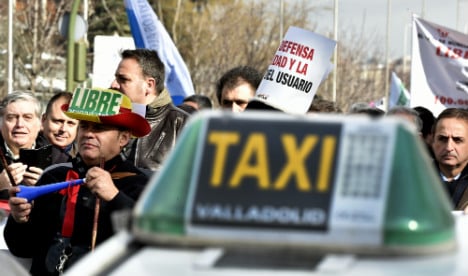 French drivers joined the thousands of protesters in the Spanish capital who sported banners that read “No to unfair competition,” denouncing among other grievances the planned deregulation of the sector.

Spain's cabbies fear that the country's competition and markets authority will harm their livelihoods by favouring upstart companies like Uber.

The company, which allows customers to hail drivers using a smartphone app and bypass traditional taxi services, has been the target of cabbie anger the world over.

Uber does not employ drivers or own vehicles, but instead uses private contractors with their own cars, allowing them to run their own businesses.

Licensed cabbies must undergo hundreds of hours of training in some countries, and they accuse Uber of endangering their jobs by flooding the market with cheaper drivers who only need a GPS to get around.

“What multinationals want is to provide a more precarious service to citizens and more precarious jobs for workers, who become slaves,” Miguel Angel Leal, head of the Spanish Taxi Federation, told AFP.

Fernando Gomez, a 57-year-old taxi driver from Barcelona who was been in the business since 1984, said his revenues had halved in the space of seven years.

The competition authority has publicly welcomed the arrival “of new models of service providers, particularly the… transport of travellers in private vehicles, which benefits consumers.”

It considers that services like Uber or car-sharing website Blablacar will lead to more competition and a drop in prices.

But since the end of 2014, Uber's low-cost UberPOP service – which allows unlicenced drivers to become taxi drivers using their own cars – has been suspended in Spain.