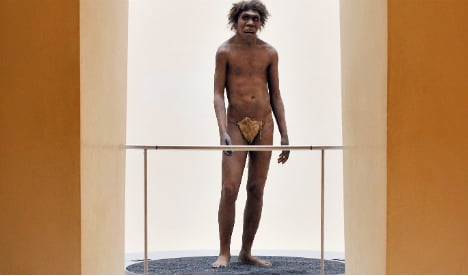 A representation of a Neanderthal man. Photo: AFP

Traces of human DNA found in a Neanderthal genome suggest that we started mixing with our now-extinct relatives some 100,000 years ago at least 40,000 years earlier than previously thought, according to the research published in the journal Nature.

The DNA legacy resulting from interbreeding was detected from a toe-bone of a Neanderthal woman who lived more than 50,000 years ago in Denisova Cave in the Altai Mountains of Siberia, Russia.

Genetic analysis reveals that portions of human DNA lie within her genome, revealing an interspecies mingling that took place 100,000 years ago.

“This is the first genetic evidence that early modern humans met Neanderthals and bred with them earlier than we thought,” said lead author Sergi Castellano, an evolutionary biologist from Spain who is now based at the Max Planck Institute for Evolutionary Anthropology in Leipzig, Germany.

“We knew from Neanderthal DNA found in the genomes of humans outside Africa that Neanderthals and humans have interbred. This interbreeding is estimated to have happened less than 65,000 years ago, around the time that modern human populations spread across Eurasia from Africa,” explained Castellano in the research paper.

“We now find evidence for a modern human contribution to the Neanderthal genome. This is likely the result of much earlier interbreeding,” he wrote. A model of a Neanderthal at France's National Museum of Prehistory in the Dordogne. Photo: AFP

The study provides genetic evidence to suggest our ancestors made the mass migration out of Africa much earlier than previously thought.

It is the first genetic evidence of a scenario in which early modern humans left the African continent and mixed with now-extinct members of the human family in the Near East.

“These discoveries have direct implications on the evolutionary model,” said Antonio Rosas, of the Spanish Natural Science Museum and one of the study authors.

Neanderthal genes from these encounters are found in humans today, and recent studies have shown that these portions of DNA play an integral role in everything from our immune system to our propensity to diseases.