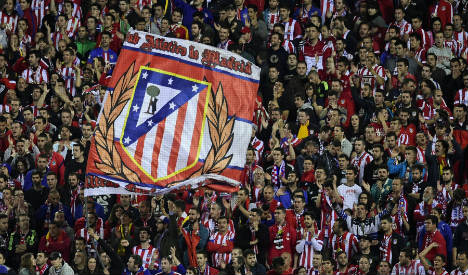 The 18-year-old, identified only as Alvaro C. G., was found guilty of homicide, illegally carrying weapons and taking part in a brawl, a Madrid juvenile court said in a statement issued Monday.

After he has served his term, he will be put on probation for a further two years, the court added.

The incident happened in November 2014 when a brawl broke out before a match pitting Atletico Madrid against Deportivo de la Coruña.

Some 200 rioters – most of them radical fans of the two football clubs – marauded around the Spanish capital brandishing knives and metal bars.

In the ruckus, father-of-one Francisco “Jimmy” Romero was beaten up before being pushed into the Manzanares river near Atletico Madrid's Vicente Calderon stadium.

He fought for his life in the freezing cold water and was pulled out alive after rescue services arrived.

However the 41-year-old, a member of the Deportivo hardcore fan group Riazor Blues, died later in hospital from head and stomach wounds sustained in the fighting.

The court, after hearing the testimony of a protected witness, found that Alvaro C. G. was the one who hit the victim in the stomach with a baton.

“Helped by three other youths, he continued to hit him with the intention of killing him,” the witness said.

“Knowing his critical state, some of them then threw him into the Manzanares river,” — a moment that was captured on video camera.

The Madrid juvenile court also sentenced a minor, identified as Isaac D.C., to a year of probation and 60 hours of community service for his role in the brawl and for illegally carrying weapons.