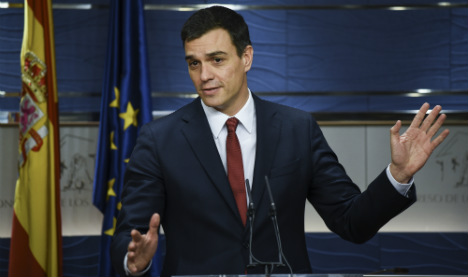 The country has been plunged in more than eight weeks of political deadlock since inconclusive elections on December 20, at a particularly sensitive time for Spain as it emerges from a severe economic crisis.

“I have set March 2nd as the day” for the much-anticipated parliamentary session, Lopez told reporters — a session that will see lawmakers hold debates before voting for or against Sanchez on the same day or the next, depending on the length of each intervention.

The 43-year-old was nominated by the king as candidate to be prime minister earlier this month following elections that resulted in a parliament fractured along four main parties – none of which have enough seats to govern alone.

Since then, Sanchez has held talks with most political groupings that won parliamentary seats to try and garner enough support for his nomination but he is far from guaranteed success as the parties he needs have conflicting agendas.

The ruling Popular Party, which won the elections but without an absolute majority – and whose leader Mariano Rajoy stood aside in the prime ministerial run due to lack of support – will not back the Socialists.

Anti-austerity upstart Podemos, meanwhile, refuses to get into a coalition government with the Socialists if it will also include the new centrist Ciudadanos grouping.

But the Socialists want to negotiate with both parties.

Sanchez still has a little over two weeks to try and form a coalition government that will be put to the test on March 2 or the next day.

He needs an absolute majority to be voted through, and if he doesn't succeed, another poll takes place 48 hours later, where Sanchez will only require a simple majority.

If both fail, a two-month countdown begins from the first vote, at the end of which new elections will be called if no solution is found.