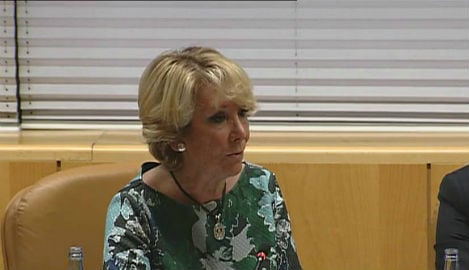 Esperanza Aguirre appears in the televised inquiry. Photo: Screen Grab
Acting Prime Minister Mariano Rajoy's party has seen graft case after graft case smear its image during its four years in power, at a time when many Spaniards suffered the effects of tough spending cuts sparked by an economic crisis.
Esperanza Aguirre, president of the PP in the Spanish capital region and a former education and culture minister under former prime minister Jose Maria Aznar, was questioned over alleged embezzlement by members of the Madrid chapter of the party.
She has not been charged with any misdemeanour but was called to testify at the commission of inquiry created in October by the regional assembly to probe alleged wrong-doing in Madrid.
“As far as I know, there is no illegal financing at the PP in Madrid,” the 64-year-old, who was regional president for nine years, told local lawmakers.
Asked how she could have ignored the alleged illegal practices at her party, Aguirre responded that she had supervised annual budgets worth 17 billion euros ($19 billion) and could not have known about the activities of
every single member.
This is but the latest case affecting the PP. On Thursday, Spanish police raided the party headquarters in Madrid over the alleged awarding of multi-million-euro public works contracts in exchange for illegal commissions.
Acting Deputy Prime Minister Soraya Saenz de Santamaria was also forced to announce the resignation of one of her main associates in connection with a corruption scandal at a state-run water company he once oversaw.
And PP members are also due to be questioned by a judge over how exactly the hard-drives of former party treasurer Luis Barcenas, who is in jail for embezzlement, were wiped clean before investigators were able to see them.
Corruption was one of the issues that cost the PP votes in December elections, which the party won but without the absolute majority it got in 2011 polls.
It has since failed to put together a coalition government, forcing Rajoy to stand aside and let the Socialist Party seek to form an alternative administration.