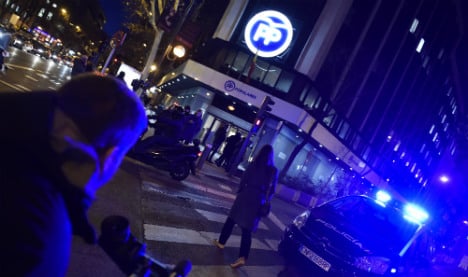 The source said police searched the office properties of former PP official Beltran Gutierrez and OHL board member Javier Lopez, as they pursue a bribery and money laundering probe.

The raids are the latest in a series that have embarrassed the PP and concern the alleged payment of illegal commissions for the award of public works contracts worth a reported €250 million ($260 million).

The party lost its absolute majority in a December general election and has since failed to put together a coalition government, forcing Rajoy to stand aside and let the Socialist Party seek to form an alternative administration.

In a separate operation last month, police detained 24 people in Valencia in the east, including a former PP regional president, in a case surrounding alleged commissions in exchange for public work contracts and there has been a series of other cases of alleged wrongdoing.

The corruption cases have seen the main political parties lose popular support, leading to the inconclusive election outcome as many voters switched to new parties campaigning against graft.

In October 2014, a high court judge ordered that 51 people, including mayors and businessmen, be detained on suspicion of bid rigging including conservative Francisco Granados, a former member of the Madrid regional government.

Three years ago, Rajoy, who became prime minister in 2011, had to deny media allegations that he and party colleagues received cash from a parallel party account or slush fund.

The corruption allegations have been seized on by a public weary of the political class after six years of political crisis with unemployment topping 20 percent.

Underpinning the discontent is yet another graft case — a landmark trial involving Princess Cristina, King Felipe VI's sister. She is charged with two counts of tax fraud in a scandal centred on the business dealings of her husband, former Olympic handball medallist Inaki Urdangarin.