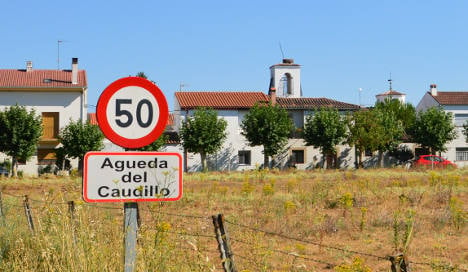 The battle to eliminate Franco era symbols from Spain is gaining momentum with the launch of a legal bid to re-name 11 towns that honour generals and the dictator himself.

Lawyer Eduardo Ranz submitted a formal request to the Spanish Federation of Cities and Provinces (FEMP) on Thursday to rename 11 different towns that are named after Francoist Civil War generals or reference Franco himself, Europa Press reported.

Five of the towns such as Águeda del Caudillo include Franco's title of caudillo in their names, which he used to proclaim himself the head of state and government. Others include his associates as part of their names, such as Quintanilla de Onésimo, or “Onésimo's Quintanilla,” in reference to Civil War Francoist propaganda leader Onésimo Redondo Ortega.

Ranz argues that the references to Franco and his associates violate the country's Historical Memory Law passed in 2007 which condemned the dictator's regime and called for the removal of Francoist symbols from public spaces.

“There is no better way to exalt the Civil War and the dictator than to maintain the names of the biggest proponents of the conflict in the name of a town,” the lawyer wrote in the request.

The Madrid lawyer's new request calls for the renaming to be “immediate” and also denounces eight of the towns' mayors for incitement of hatred because for not changing the names.

Many of the towns were created under a Francoist programme of the National Institute of Colonization which built more than 300 new towns to bolster rural locations.

One of the towns, Alcocero de Mola, was named after commander Emilio Mola, who was a main coordinator of Franco's military coup that led to the three-year Civil War and the dictator coming to power in 1939.

Mola died during the war and a monument to him still stands in the town.

“In the same way that a 'Hitler's Cologne' or a 'Mussolini's Trastevere' do not exist, it is disgraceful that in Spain these towns of the caudillo still exist,” the lawyer wrote, according to El Diario.”It is a name that was imposed out of fear and is contrary to democracy.”

Politicians in other Spanish towns have worked over the past year to rename streets from the Franco era, including the capital Madrid where 30 streets are taking on new names of terrorism victims.

Franco remains a divisive figure for some with groups still honouring his death each year and many statues of the dictator and his generals still linger around the country.

A photo of Guardia Civil officers posing with one of those symbols, a statue in the north African enclave of Melilla, sparked outrage last year, especially because the guard was known to be a personal army for the fascist leader until his death in 1975.

Others still seek justice and official recognition of crimes committed under the dictatorship.

Last year following a public campaign, officials changed the name of a town in northern Spain that for centuries had been named after a Jewish massacre carried out during the Spanish Inquisition.