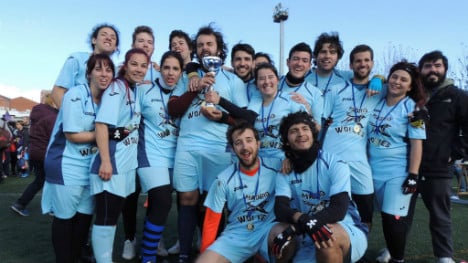 The fictional game from the pages of Harry Potter is now a real-life sport. It gained popularity in the US before flying over to Europe where it has been embraced enthusiastically by Spaniards.

Madrid Wolves won the first Muggle Quidditch Cup in Spain on Saturday after fighting off seven other Spanish teams to claim victory in a sport that is – surprisingly – going from strength to strength in Spain.

“As a coach I am very proud of the team performance after months of hard training, which paid off by making us the first champions in the history of the Spanish cup,” Madrid Wolves coach, Miguel Vázquez, told The Local.

The realife game developed from J.K Rowling's fictional original mixes elements of rugby and handball, with all of the bashing, tackling and occasional bloody injuries they entail.

But there is of course one little problem. The players can't fly.

Despite that, players run with their broomsticks between their legs, aiming to throw the ball between the three hoops at each end of the quidditch pitch.

Eight teams took part in the championship: three from Galicia, two from Madrid, two from the Basque Country and one from Andalusia.

They were competing for the two sought after places in the European Quidditch Cup, which will be held in Italy in April.

The two teams to make it through were Madrid Wolves and the Bizkaia Boggarts – who came first and second respectively.

In February 2015, The Local met the Madrid Lynx, the team responsible for bringing quidditch to Spain, and which would eventually evolve into the Madrid Wolves and learnt a thing or two about how to play the magical game.