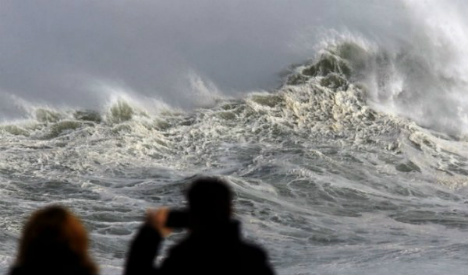 Officials warned people against taking photographs and getting too close to the huge waves on the coast.

Spain's Interior Ministry has implored people not to put themselves in danger for the sake of a photograph.

“With the current stormy weather, DO NOT go near the coast. Your safety is worth much more than a spectacular photo,” it tweeted on Tuesday.

High waves have been causing damage all along Spain’s northern coast.

One of the worst-hit places was San Sebastián in the Basque Country. Buildings along the city’s iconic La Concha beach were damaged by giant waves measuring as high as nine metres.

A woman with a pushchair walking far too close to the sea in San Sebastián.

The city declared a state of emergency on Tuesday as many of its coastal buildings were being battered by the ferocious waves.

San Sebastián mayor, Eneko Goia, told local newspaper Diario Vasco that the regional Basque government on Tuesday approved the state of emergency so that repairs could be started “immediately”.

Goia also called on locals and visitors to the city to be cautious and to stay away from the waves.

The waves have caused damage to several bridges in San Sebastián.

In Galicia, northwestern Spain, daredevils took to the waves on their surfboards, despite the fact the area was under orange alert from Spain’s national weather agency, Aemet.

In Asturias, a baby was swept out to sea from the arms of his grandfather on Monday evening by a giant wave. Search operations were entering their third day on Wednesday.

WATCH: Terrifying video shows why not to go near sea in France

Meanwhile, planes flying to Bilbao airport in northern Spain struggled to land in severe windy conditions on Tuesday as much of northern Spain was on alert for storms, winds and high waves.

One landing was aborted at the very last minute, while other planes were jolted from side to side by the strong winds.