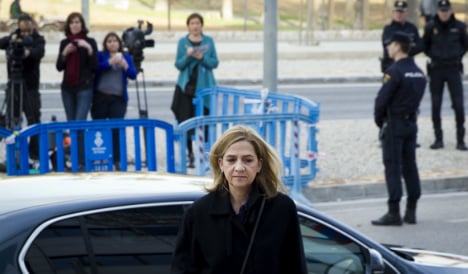 The princess, dressed in black, and her husband, former Olympic handball medallist Iñaki Urdangarin, walked briskly past dozens of journalists waiting for them outside the court in Palma on the Mediterranean island of Mallorca.

The couple are among 17 suspects who went on trial last month as part of the case which involves business dealings by the Noos Institute, a charitable organisation based in Palma which Urdangarin founded and chaired from 2004 to 2006.

The 48-year-old and his former business partner Diego Torres are suspected of embezzling around €6 million ($6.7 million) in public funds paid by the regional governments of Valencia and the Balearic Islands to the organisation to stage sporting and other events.

Urdangarin is accused of using his royal connections to secure inflated contracts without competing bids and siphoning off some of the money into Aizoon, a firm he jointly ran with Cristina, to fund a lavish lifestyle.

The couple are suspected of using Aizoon for personal expenses including work on their mansion in Barcelona, dance lessons and even Harry Potter books, which reduced the firm's taxable profits, according to court filings.

The first to take the stand on Tuesday was José Luis Ballester, a former Olympic sailing gold medalist and childhood friend of King Felipe VI, and his sister Cristina, who was head of sports in the regional government of the Balearic Islands at the time of the alleged crimes.

Among the other accused is Jaume Matas, the former head of the government of the Balearic Islands with the conservative Popular Party.

The trial began on January 11th but was suspended for several weeks while the three-judge panel ruled on several legal questions, including a petition that the case against Cristina be dropped.

The princess is scheduled to be the last defendant to be questioned and she is expected to take the stand at the end of the month.

The trial is set to wrap up at the end of June.

If convicted, Cristina – who has denied knowledge of her husband's activities – faces a jail term of up to eight years. Urdangarin faces more than 19 years in prison.