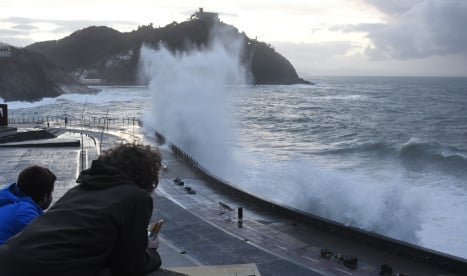 The 20-month-old child was swept into the sea in Navia on the northern Spanish Asturian coast at around 5.30pm on Monday while walking on Frejulfe beach with his father and grandfather.

The child – an only child – was in the arms of his grandfather when the wave struck, according to local newspaper, El Comercio.

All three were swept into the sea but when the father and grandfather managed to pull themselves out onto the beach, they realized there was no sign of the little boy.

“The father went into the water at least twice to try and find the child, but it was impossible,” Maria Fernández, a Navia Town Hall councillor who witnessed the incident, told El Comercio.

Conditions on the beach were terrible; much of the coast was on high alert for unusually big waves and storms, with nine-metre-high waves forecast for areas along Spain's northern coast on Monday.

Witnesses raised the alarm and police and coast guard were soon on the scene; helicopters scoured the area until midnight.

The search operation started again on Tuesday morning  with three helicopters and a coast guard vessel, the Concepción Arenal, combing the area. Police and fire department teams were also searching the coastline.

“He escaped from their hands in a tragic accident,” said Navia mayor, Ignacio García Palacios, who arrived on the scene on Monday evening.

The baby’s father was taken to the nearby Jarrio Hospital suffering from severe shock after insisting on going back into the water to try and save his baby.

Members of Spain’s Guardia Civil, along with the baby’s grandfather informed the child’s mother of the incident around two hours after it occurred.

All three family members were being treated in hospital for shock on Monday night.

Councillor Maria Fernández that some of the baby’s clothes had washed up on the beach on Monday evening, something which was making the search extra difficult now emergency services could not look out for the colour of his clothes.

Fernández warned others from getting too close to the sea while it is so fierce, criticizing the attitude of many locals who want to get close-up photographs and put their lives in danger.