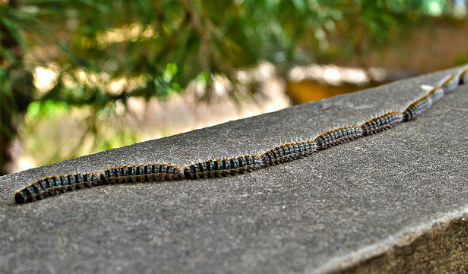 A mild winter has led to a proliferation of the Pine Processionary Caterpillar   (Thaumetopoea Pityocampa) across Spain, according to experts who warn that that the danger has arrived early.

The caterpillars usually emerge at the start of spring but experts warn that this year, because of unusual weather conditions, the danger season has started early.

“After a winter that has been much milder and drier than normal, the population of the processionary caterpillar has flourished and brought forward their arrival,” Milagros Fernandez de Lezeta, director of Spain's Pest Control Association (ANECPLA), told The Local.

“They pose a major risk to children, adults and pets causing dermatitis, eye damage and severe allergic reaction,” she explained.

The eggs are laid in candyfloss-like nests in pine trees until it is time for them to hatch and find food when they drop to the ground and move head to tail in a procession to form the conspicuous snake-like lines for which they are named. The caterpillars, measuring between three and four centimeters in length, are particularly dangerous to children who may be curious enough to touch them, and to dogs, who may attempt to eat them.

Dogs which come into contact with the caterpillars could pick up the hairs on their paws, which are then licked because of the irritation and the poison spreads to the mouth.

They could suffer breathing difficulties, vomiting or start foaming at the mouth and should be taken urgently to the nearest veterinary clinic.

Sometimes amputation of the tongue or nose is the only course of action and contact can result in death.

The risk is not confined exclusively to pine forests but can occur anywhere where pine trees grow, including city parks, private gardens and roadsides.