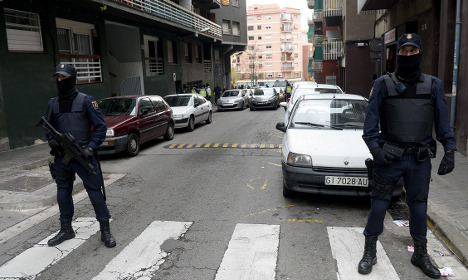 The arrests were carried out in the eastern cities of Valencia and Alicante and in Spain”s North African enclave of Ceuta. Photo: Josep Lago/AFP

The arrests were carried out in the eastern cities of Valencia and Alicante and in Spain”s North African enclave of Ceuta, the police said in a statement.

“Four of those arrested are Spanish nationals of Syrian, Jordanian and Moroccan origin,” it said.

A Syrian and a Moroccan were also taken into custody, it said.

A police spokesman later announced a seventh arrest, but did not give the individual’s nationality or other details.

The operation was still ongoing.

The arrests were made in the context of an investigation launched in 2014 into “foreign structures” of ISIS and the Al-Nusra Front, an Al-Qaeda affiliate in Syria, police said.

One of those arrested was a man who dispatched “military material, money, electronic and transmission material, firearms and precursors for making explosives” to Syria and Iraq via a company, the police statement said.

This was shipped out in closed containers under the guise of humanitarian aid, and financed by “hawala,” an informal system of payment based on trust that is far more difficult to trace than bank transfers.

The leader of the network was in “constant” contact with a member of the Islamic State, who repeatedly asked him to recruit women in order to marry them off to IS jihadists in Syria, the statement said.