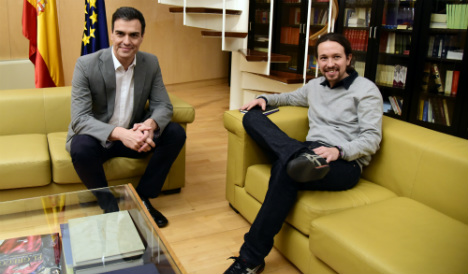 Podemos leader Pablo Iglesias said he would not negotiate with the Socialists (PSOE) if they continued to talk with upstart party Ciudadanos – an ultimatum rejected by PSOE chief Pedro Sanchez, whom the king has designated to form a government.

Spain has been plunged in political uncertainty since December 20th elections put an end to the long-established two-party, conservative-socialist system with the emergence of Podemos and Ciudadanos, resulting in a parliament fractured along four main groupings that makes any government formation difficult.

Acting Prime Minister Mariano Rajoy from the conservative Popular Party that won the polls, but without an absolute majority with just 119 seats out of 350, hoped to get the support of the Socialists to form a coalition government along with Ciudadanos.

But Sanchez categorically refused to back a party he said was tainted by austerity measures and corruption.

Rajoy gave up, and the king on Tuesday decided to nominate Sanchez as candidate to be prime minister, tasking him with the delicate task of forming a government.

Since then, Sanchez has talked to the leaders of most parties that got representation in parliament, ending the week with a chat with Iglesias, whose Podemos came third in elections with 65, very valuable seats.

But after the talks, Iglesias said he would not negotiate further with the PSOE if Sanchez insisted on keeping talking to Ciudadanos, which he considers to the right.

“Our negotiating team will be ready as soon as the Socialist party opts for a government for progress,” he said.

“But if that's not the case we're not going to work so that there is a government that includes the right.” Sanchez, meanwhile, rejected the ultimatum.

“The Socialists' aim is to get the maximum possible support,” he told reporters.