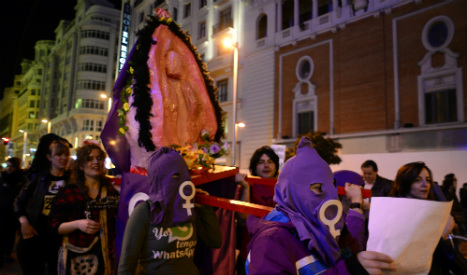 The women “carried the two-metre-high plastic vagina in the style of the Virgin” said court documents, likening the protest to traditional religious parades in which a statue of the Virgin Mary is carried on top of people’s shoulders.

The prosecution argues that the women made a mockery of this religious practice by lifting the plastic vagina onto their shoulders and parading it during a march organized by the Spanish union the General Workers’ Confederation (CGT) on May 1st 2014 (Worker’s Day in Spain).

A Spanish magistrate has asked police to identify the three women from a video of the protest, in which the women wore traditional mantillas, or lace veils, as well as rosary beads.

They will appear in court alongside two secretaries of the CGT in Seville and Andalusia who had a lawsuit brought against them by the Spanish Assocation of Christian Lawyers for “provoking discrimination, hate and violence.”

Miguel Sevillano, head of the CGT in Seville told Europa Press that the women were part of a feminist group who had “nothing to do” with the CGT.

Sevillano did argue however that he did not see any similarity between the giant plastic vagina carried by the women and Spain’s usual Holy Week processions, but he stressed he had “nothing to do with its creation,” according to Europa Press.