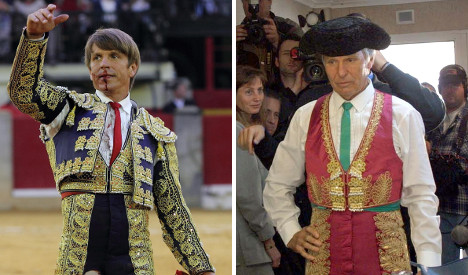 Bullfighter Manuel Díaz González – “El Cordobés” –  has filed a paternity suit against his supposed father, the original “El Cordobés”, Manuel Benítez – a matador who revolutionized bullfighting in the 1960s with his unorthodox theatrical style and techniques.

On December 1st, the 47-year-old presented a court in Córdoba with documentation and evidence for the paternity suit, including a DNA analysis of a napkin used by the senior El Cordobés to wipe his lips, he said in an interview published in Hola! magazine on Wednesday.

“The result is that, with a probability of 99.9 percent, I am the son of this man,” said Díaz.

The two bare a striking resemblance and it is generally accepted that they are father and son with Díaz even taking the same nickname as his supposed father.

But the senior bullfighter has never officially recognized Díaz, who was born out of wedlock, as his son.

The younger El Cordobés had previously told Hola in November that he was the product of an extramarital affair between the legendary matador and his mother.

She was a “young, very pretty” maid working in a residence in Madrid when she met a “very ugly” man who had a lot of power.

The two started dating, but the powerful man's parents didn’t approve, especially when she got pregnant.

He has recounted that he met his father as a child when he was given a gold watch and a handful of cash, according to El Pais.

Díaz said that he became a bullfighter to get the attention of his biological father.

The younger matador told Hola that he has grown impatient with his father’s denial, saying that  the “straw that broke the camel’s back” was when Benítez was asked about his son in a television interview and he acted as if the question were “the devil”.

“'Why doesn’t your father want to talk about you?' my children asked me. It was very powerful,” explained Díaz.

It is now up to the court to determine whether the two are in fact father and son.

Díaz said that one of his biggest motives for filing the paternity suit is because of his children who, like himself, want to know about their origins.

“I feel a great emptiness and I don’t want to die with this,” he said. “I need to close this circle.”