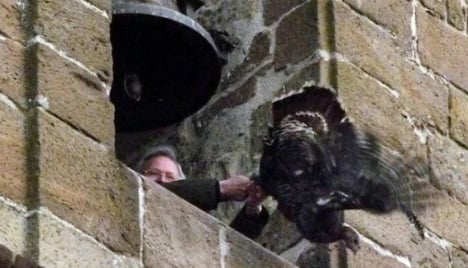 Animal rights protesters had hoped to stop the practice – which involves throwing a live turkey out of a bell tower as part of the Festival of San Blas celebrations – would be banned, but lost a last-minute appeal on Tuesday.

The unusual tradition has taken place every year since the 19th century and is due to take place on February 3rd.

It attracts thousands of tourists and locals to the town square of Cazalilla in Andalusia, where a live turkey is hurled from the bell tower of the Church of Saint Mary Magdalene.

The turkey flaps to the ground where people in the crowd try to catch it; the person who does catch the bird holds it in the air as a symbol of success and good luck.

Meanwhile single women clamour to pluck a feather from the bird as custom has it that those that do will marry an eligible bachelor within the year.

Members of Spain’s animal rights party, Pacma, argued that the event causes the bird suffering and presented a petition of 51,000 signatures to the Andalusian Government delegation in Jaén calling for this year's event to be banned because it was “animal abuse”.

“Locals in Cazalilla consider throwing the turkey from the bell tower an “act of love” tweeted Pacma chief, Silvia Barquero.

But on Tuesday, a judge in Jaén refused to ban the practice, arguing that the animal “suffered no harm”.

“It is highly doubtful that the mere act of throwing a turkey from a height constitutes animal abuse,” he said.

The event has also been criticized by the National Association for the Protection of Animals (Anpba), which argued the turkey is put through “unwarranted suffering” and “violantes Andalusia’s animal cruelty laws”.