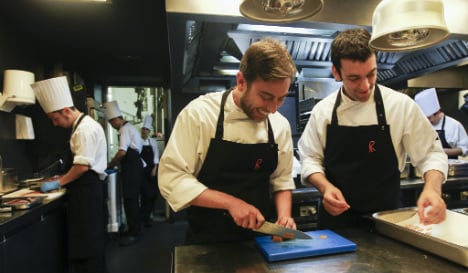 Joan Roca of the world's best restaurant, El Celler de Can Roca (pictured) is one of the judges. Photo: AFP

The prize – launched on Monday – will recognize a chef who has made an exceptional contribution to “improving society through gastronomy”, the organizers told The Local.

In recent years chefs have been using their talent for social good; getting out of the kitchen to help those less fortunate through a range of social programmes.

Michelin star chefs designed a gourmet Christmas dinner for the homeless in Madrid in December 2015, in just one example of how chefs are making an impact beyond the kitchen.

The winner of the award will have improved society in some way through gastronomy.

“This could be through culinary innovation, a commitment to social responsibility, sustainability or the economic development of their community; involvement in health or environmental campaigns, the promotion of pioneering cultural projects, or work that benefits society through their positive impact on the food industry,” the organizers said. Elena Arzak from Arzak restaurant in the Basque Country will lead the judging committee to come up with a shortlist of 20.

“It will be a tough job but exciting. We are looking for chefs or projects that embody the philosophy of the Prize. Projects that use gastronomy as a way of social improvement,” Arzak said.

To be considered for the prize, chefs – who can be of any nationality – have to be nominated online by a professional from the world of gastronomy.

The winner will receive €100,000 ($109,000) to devote to a project of their choice that demonstrates the wider role of gastronomy in society.

The prize will be awarded by the Basque Culinary Centre (BCC) in San Sebastian, a world-leading academic institution in gastronomy.

The inaugural prize will be judged by some of the world’s finest chefs, including Joan Roca , the founder of the three-Michelin-starred restaurant, El Celler de Can Roca, which was recently voted the best restaurant in the world.

“The Basque Culinary World Prize will identify men and women working in gastronomy and striving to excel. The innovative, creative, determined – and sometimes impetuous – trailblazers who are engaged with their community and demonstrate every day how gastronomy can be an engine for transformation,” Roca told The Local.

He will be joined on the judging panel by, among others, Spanish chef Ferran Adria, formally of El Bulli, British chef Heston Blumenthal and Danish chef René Redzepi.